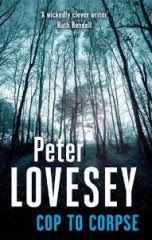 One minute PC Harry Tasker is strolling up Walcot Street, Bath, on foot patrol. The next he is shot through the head. No scream, no struggle, no last words. He is picked off, felled, dead.

Bath detective Peter Diamond takes on the most dangerous assignment of his career when he goes in search of the Somerset Sniper, a killer who is targeting policemen in West Country towns. After a constable from Diamond’s own police station is murdered in the small hours of a Sunday morning a desperate hunt follows. Action, menace and courage in the face of extreme danger are the driving forces of this story laced with the surprises that always lie in wait in a Lovesey novel.

When Peter Diamond says he suspects the Somerset Sniper is actually one of their own, his investigating team all but turn against him. When he asks them to check duty rosters for coincidences, his lieutenant refuses and Peter ends up doing it himself.

For Peter it is a pretty eventful case: he gets shot at; mown down by a motor bike; and attacked by someone who should be on his side. But nothing stops him, and despite his injuries, and the fact that his team thinks he's on the  wrong track, his mind keeps working. He proves yet again why he is at the top of his game: he sees connections no-one else does, but he isn't always right.

Another very readable tale. I think Peter Lovesey is incapable of writing a bad one, particularly if you delight in police procedurals like his.

And look, if you haven't read a Lovesey before, start with this one. It'll get you hooked! And then there are 10 earlier ones in the Peter Diamond series that you can try.

Other reviews of Lovesey titles on MiP

Kerrie - I have to agree with you: Lovesey's work is terrific. And I really like the Peter Diamond character too. I've not gotten to this one yet, but I shall have to.

Sounds good Kerry, adding it to my want to read list!

I have this on my to-get list when it comes out here. I am working my way through the series, still missing two of them, but have now managed to find the rest, in the same Soho publisher covers too!! I really enjoy them. It's good to know that they stay at least evenly good, no real bad ones in the mix.

Good review, as ever, Kerrie!