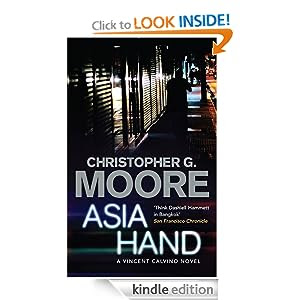 Bangkok – the Year of the Monkey.

Vincent Calvino is spending the New Year on a call-out to Lumpini Park Lake, where the Thai cops have fished out the body of a farang cameraman. Calvino traces the American’s murder to an elite unit of old Asia hands – a set of foreigners with bad reputations and powerful friends.

Bangkok—the Year of the Monkey. Calvino’s Chinese New Year celebration is interrupted by a call to Lumpini Park Lake, where Thai cops have just fished the body of a farang cameraman. CNN is running dramatic footage of several Burmese soldiers on the Thai border executing students.

Calvino follows the trail of the dead man to a feature film crew where he hits the wall of silence. On the other side of that wall, Calvino and Colonel Pratt discover and elite film unit of old Asia hands with connections to influential people in Southeast Asia. They find themselves matched against a set of farangs conditioned for urban survival and willing to go for a knock-out punch.

On his site the author lists ASIA HAND as #2 in a series of twelve books featuring private investigator, one time New York lawyer, Vince Calvino. Mainly set in Bangkok, the settings for the novels also venture into Vietnam, Laos, Cambodia and Burma. ASIA HAND is set in Bangkok but revolves around documentary footage shot by an American cameraman on the Thai/Burma border which purports to show Burmese aggression.

The cameraman is Calvino's neighbour and when he is found dead in Lumpini Park Lake, Vince attempts to find out how he died. At first he is puzzled why Hutton had not told him about the film footage, and then he begins to wonder the action was genuine or staged.

Another film, soft-porn really, Lucky Charms, is being shot in Bangkok and Calvino learns that his ex-wife is coming over from New York to play a role, and then that his lover also has a part. Finally his teenage daughter is also offered a part. Calvino learns that the team producing the film have made several others in the past few years, set in Asian political hotspots, beginning in Saigon many years before, and he begins to suspect an underlying agenda that has nothing to do with the films being made.

Someone is out to stop Calvino and Thai policeman Colonel Pratt from unearthing the truth behind both Hutton's murder and the documentary footage. After other attempts to stop him fail, Calvino realises that his daughter is their target.

ASIA HAND is gritty and noir, in fact just a little too so for me. I suspect it will appeal to male readers more than it did to me. On the other hand I did feel I was getting some genuine insights into Thai culture. I just didn't enjoy it.

I read ASIA HAND as part of the 2012 Global Reading Challenge.

Read an excerpt of ASIA HAND.
In 2011 ASIA HAND won the Shamus Award for Best Original paperback.In fact the series has been winning awards since 2004.
Check the official Vince Calvino site.

Christopher G. Moore is a Canadian writer who once taught law at the University of British Columbia. After his first book His Lordship’s Arsenal was published in New York to a critical acclaim in 1985, Moore became a full-time writer and has so far written 23 novels, a non-fiction and one collection of inter-locked short stories. (I met Christopher a couple of years back at Left Coast crime in Hawaii.) more

Besides his own blog, Christopher is also part of the International Crime Authors Reality Check Team.

Kerrie - Sorry to hear this one wasn't your cuppa. I honestly don't think it would have been mine either actually. The setting interests me but the rest? Not so much.