Just over a month ago I wrote a post for Friday's Forgotten Books about A DARK ADAPTED EYE which apparently I originally read 20 years ago. As is the way of things, I could remember almost nothing about it and decided to re-read it. I settled on an audio version read by Harriet Walter available from Audible.

The book was first published in 1986.
The audio version is 11 hours and 46 minutes of enthralling listening. 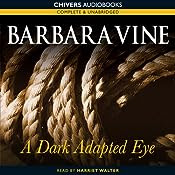 When Faith Severn's aunt was hanged for murder, the reason behind her dark deed died with her. For 30 years, the family hid the truth--until a journalist prompts Faith to peer back to the day when her aunt took knife in hand and entered a child's nursery.

Like most families, they had their secrets...
...and they hid them under a genteelly respectable veneer. No onlooker would guess that prim Vera Hillyard and her beautiful, adored younger sister, Eden, were locked in a dark and bitter combat over one of those secrets. England in the '50s was not kind to women who erred, so they had to use every means necessary to keep the truth hidden behind closed doors - even murder.

This is one of those books that clearly show how Ruth Rendell becomes a different writer when she uses the Barbara Vine pseudonym, at least in the early days. I think later Rendell novels actually have Vine overtones; the police procedurals have more psychological explorations, more description of why characters have acted as they did.  A DARK ADAPTED EYE was the first of the novels written as Barbara Vine and was very different to the Wexford novels, although it showed many similarities in style to the stand alone novels she had already published.

So why did Rendell write as Barbara Vine? I believe she was just too prolific as a writer, writing at least two novels every 3 years, perhaps leading buyers to believe that she was writing pot boilers. Quite simply the extra pseudonym gave her more publication opportunities, and many of her readers did not realise the two writers were the same person.

A DARK ADAPTED EYE explores family relationships. During the bombing of London in 1940 Faith, not yet a teenager, is sent to stay in the country with her father's half-sisters Vera and Eden. In the following years Faith periodically spends extended periods of time with Vera. The setting of England in the 1940s and early 1950s helps us reflect on the impact of events like war on society's values as well as their impacts on individuals.

The novel explores family jealousies that eventually lead to murder. Faith gets an opportunity to look back over events, and to consider what happened with an older eye, when a journalist contacts family members because he wants to write a book about Vera. What is interesting about how Vine has handled this plot is that even in the last pages of the novel there are a number of questions that are not finally resolved, where the reader is required to make their own judgement.

An excellent read and a good Barbara Vine to start with if you've never read one.

Kerrie - I agree; it's a good place to start with Vine's work. I liked this one very much, and especially I think I liked the ties between past and present.

This was my first Barbara Vine or even Ruth Rendell book and, although it has been a very long time since I read it, I remember being extremely impressed. And frightened.