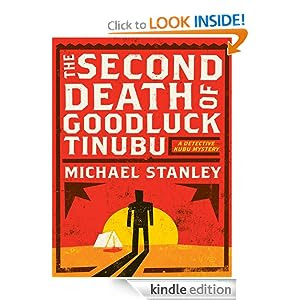 The first book in the series, A Carrion Death, was set in the deserts of Botswana, where the world’s richest diamond mines are located. The story dealt with greed, power, lust, and the conflict between modern views and traditional values.

The second book, The Second Death of Goodluck Tinubu (USA) or A Deadly Trade (elsewhere), is set in the very north of Botswana, which contrasts vividly with the dry rest of the country. The Okavango delta, and the Chobe and Linyanti rivers, alive with hippos and crocodiles, push against the desert with lush vegetation and teeming wildlife. Huge numbers of elephants make this area their home, and herds of several hundred are common. The crystal-clear water and trees rich in fruit make these waterways a bird-lovers paradise. Hundreds of species of birds make their home here, from huge vultures to colorful parrots and lovebirds.

The area is also where four countries come together: Botswana, Namibia, Zambia, and Zimbabwe. The rapidly declining situation in Zimbabwe, with its shattered dreams and human suffering, provides the subtext of the story. The countries surrounding Zimbabwe often find themselves caught between old loyalties from the struggles for freedom, and the embarrassment of having a neighbor like Zimbabwe as a member of the New Africa.

The story begins with the murder of a gentle teacher and a South African policeman.

This is #2 in the Kubu series and I read it to fill in a gap in my reading.
What I have enjoyed about these books is not only the very clever and tight plotting, but the lovely character development of Detective “Kubu” Bengu, his immediate family, and those he works with. It seems to me also that the setting provides another strong character. The initial action is set in tourist camp, but the roots of the plot go back decades into the history of Zimbabwe.

The character of Bengu gives the authors plenty of scope to show policing in Botswana in a good light. It comes across as a rather different Botswana to that of Precious Ramotswe but the values are the same.

I've also reviewed
About the author

Michael Stanley is the writing team of Johannesburg natives Michael Sears and Stanley Trollip. Sears lives in Johannesburg and teaches part-time at the University of Witwatersrand. Trollip was on the faculty at the universities of Illinois, Minnesota, and North Dakota, and at Capella University. A full-time writer, he divides his time between...

Kerrie - Oh, I like this series a lot. The character of Kubu Bengu is very well-drawn and the setting is terrific. Glad you liked this one as well as you did.

I'm kind of interested, new author, different setting but the length puts me off.