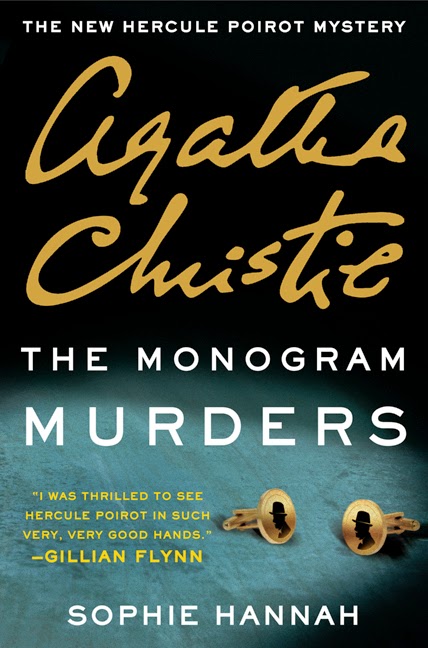 Hercule Poirot's quiet supper in a London coffeehouse is interrupted when a young woman confides to him that she is about to be murdered.  She is terrified – but begs Poirot not to find and punish her killer. Once she is dead, she insists, justice will have been done.

Later that night, Poirot learns that three guests at a fashionable London Hotel have been murdered, and a cufflink has been placed in each one’s mouth. Could there be a connection with the frightened woman? While Poirot struggles to put together the bizarre pieces of the puzzle, the murderer prepares another hotel bedroom for a fourth victim...

I feel pretty strongly about  what I have called elsewhere "coat-tails" writing. Nevertheless I was interested to see whether Sophie Hannah could capture anything like the spirit of Agatha Christie's Hercule Poirot. I guess that is what a lot of Agatha Christie readers want to know, and I have decided to try to judge THE MONOGRAM MURDERS on its own merits, as far as I can.

The setting is February 1929 in London. According to the Hercule Poirot chronology, this is thirteen years after Poirot left Belgium and arrived in England as a refugee. In 1925 he "officially" retired, at the age of  about 61. So he is really at the height of his deductive powers, has been working privately, but has not been very satisfied with the kind of work he has managed to get.

Here are the stories set around this date.


THE MURDER ON THE BLUE TRAIN

The story is narrated by a young Scotland Yard detective,  Inspector Edward Catchpool. He and Poirot have rooms in a London lodging house belonging to Mrs Blanche Unsworth. From the lodging house Poirot can see his own apartment house, where he normally lives, but he has spread the rumour that he has gone on vacation out of London. The narration has been completed it seems some time after the events. I found the placement of the story in the Poirot chronology interesting and that probably worked better than later in Poirot's life.

I considered several things as I read this book: had the author captured Agatha Christie's style? Did I recognise this Hercule Poirot? Did the plot hold together?

Well, there were glimpses of the original Hercule Poirot - there was his faith in his own ability to solve the case logically, and his disparagement of others like Catchpool who could not match his abilities. He played his cards very close to his chest, not wanting to share his knowledge or conclusions.  But there was little description of Poirot's physical appearance, not much sense of his dapperness or fastidiousness.

The plot worked well enough but was rather more convoluted than an original Christie, resulting in a slightly longer book. There were passages that I could not envisage Christie having written. Christie had a sparer style than displayed in this novel. Some parts of the story seem almost theatrical particularly when Poirot gathers a large audience of the staff at the Bloxham hotel so that he can confront the guilty persons. During the story we hear different interpretations of what has happened, and much depends on the timing of when things happen. Red herrings abound. So it is very easy for Catchpool and the readers to become a little confused.

Worth the read? Yes, you really do want to know what actually happened and all is not revealed until the very end.  But I don't want to see another: I for one don't want THE MONOGRAM MURDERS to be beginning of a string of pseudo-Christies.

While I read this for the Agatha Christie Reading Challenge, I have also read the following by Sophie Hannah.

I'm not keen on "coat-tails" writing. I've been disappointed by some in the past so I've been reluctant to read this book. I'd rather stick to the "real thing", so I was pleased to read your post as I wondered what this book would be like. I don't think I'll bother reading it myself!

I was happy to see that you had read this book too. I had wondered. Sophie Hannah is an author that I've been meaning to read for such a long time. And, frankly, I was surprised that Christie's family had permitted another author to write Poirot. Well, I kind of think when an author is gone, they should be gone. I can understand if some books are left unfinished and another author is brought in to complete a book. I wish someone would do that with Stieg Larsson's unfinished Lizbeth Salander book or books, which I think I read exist.

Good to hear what you thought. Not sure I will try this one. But, I do mean to try Sophie Hannah's series that is her own.