Review: THE STEEL SPRING, Per Wahloo 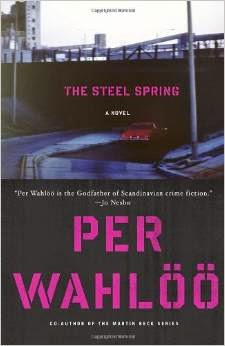 Chief Inspector Jensen is a policeman in an unnamed European country where the government has criminalized being drunk, where newspapers are designed for reassurance, and where the city centers have been demolished to devote more space to gleaming new highways.

Recovering in a hospital room abroad after a liver transplant, Jensen receives a note instructing him to return home immediately, but when he reaches the airport he discovers that all flights home have been cancelled and all communication from within his homeland has ceased. One of the last messages sent requested urgent medical help from abroad. But what has happen? Has an epidemic taken hold? And why has the government fled the capital? To penetrate the silence and mystery that has fallen over the country and its people, Jensen returns only to discover the unthinkable.

This was the last novel that Per Wahloo wrote on his own. (see Fantastic Fiction) All the later ones, the last six in the ten title Martin Beck series, were written in partnership with Maj Sjowal.  THE STEEL SPRING is the only one of his stand-alone novels that I have read so far, although I have some more on my radar.

Although crimes have obviously been committed, the plot is not really crime fiction, but rather is dystopian, emerging from his Marxist-based vision of where Swedish society is headed. It is heavily infused with disillusionment and scary messages. In contrast to other dystopian novels that I have read, it is not a world apocalypse that will destroy Sweden, but rather it will self-combust.

He does not name Sweden in the novel, probably to escape some sort of prosecution, but every one who read the novel at the time would know which country he was referring to. Hakan Nesser uses a similar ploy in his novels set in an unnamed Scandinavian country, although I don't think his have the political overtones of THE STEEL SPRING (and perhaps others by Per Wahloo).

Although there is at least one mystery strand, the tone of the novel is polemic and didactic, and will not suit some readers. On the other hand it reminded me of FAHRENHEIT 451 (Ray Bradbury), NO COUNTRY FOR OLD MEN (Cormac McCarthy), and Chris Womersley's THE LOW ROAD. And it is not unknown for crime fiction writers to convey social messages through their work (think about Ian Rankin, Henning Mankell and others).

Interesting, Kerrie. I'm not usually one for dystopia, but this one does have an interesting premise.

The premise sounds interesting, and I am intrigued by your comparison to Bradbury and McCarthy. I am adding this to my list.