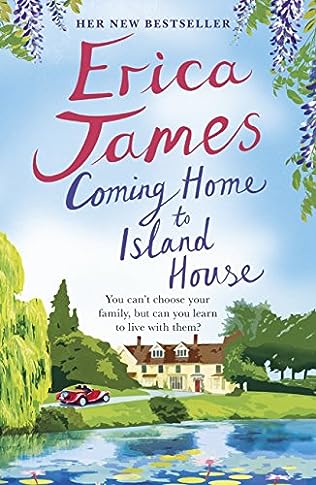 Summer 1939: After touring an unsettled Europe to promote her latest book, Romily Temple returns home to Island House and the love of her life, Jack Devereux. But when Jack falls ill, his estranged family are called to his bedside.

With war now declared, each member of the family is reluctantly forced to accept their new stepmother and confront their own shortcomings. But can Romily cope with the life that has been so unexpectedly thrust upon her?

Another title that is not crime fiction.

Romily Temple, best selling crime fiction author, has recently secretly married Jack Devereaux, but while she is overseas, Jack has a stroke, and now Romily has to summon the 4 family members to his deathbed. So they arrive home at Island House to find not only that they have a stepmother they did not know existed, but eventually to discover that their father has put a very strange clause in his will.

Jack Devereaux has been estranged from his two daughters, son and female cousin for some time. Their childhoods were not happy as their mother died when they were very young and Jack did not cope, installing a series of nannies, and keeping the children at arm's length.

This was a very readable story. The terms of the will require the family to spend a week together with their stepmother in order to qualify for their inheritance. The interaction between the characters is fascinating. On the day of Jack's funeral England declares war on Germany and this gives the novel an interesting historical background. One of the daughters arrives home with a refugee child in her arms, the men of the village enlist for war, and the social climate is changed forever.

I'm sure I will read another by Erica James. There are over 20 novels to choose from, and most of the plots look interesting.

About the author
Erica James is the author of several bestselling novels. Born Erica Sullivan, she grew up on Hayling Island in Hampshire, England and lives now with her two sons in Cheshire. She began writing after attending a creative writing course at the Arvon Foundation.