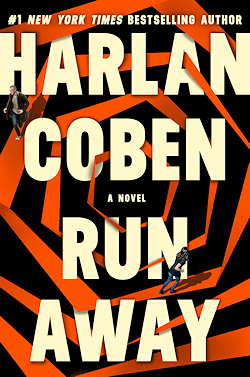 A perfect family is shattered in RUN AWAY, the new thriller from the master of domestic suspense, Harlan Coben.

She’s addicted to drugs and to an abusive boyfriend. And she’s made it clear that she doesn’t want to be found.

Then, by chance, you see her playing guitar in Central Park. But she’s not the girl you remember. This woman is living on the edge, frightened, and clearly in trouble.

You don’t stop to think. You approach her, beg her to come home.

And you do the only thing a parent can do: you follow her into a dark and dangerous world you never knew existed. Before you know it, both your family and your life are on the line. And in order to protect your daughter from the evils of that world, you must face them head on.

I was pleasantly surprised with the direction the plot of this novel took.

Simon Greene's search for his daughter in the drug dens of Manhattan leads to his wife Ingrid being shot and one of those they met in drug den being shot too.
As Ingrid lies in a coma in a Manhattan hospital Simon continues to search for his daughter Paige.  He is joined by ex FBI investigator Elena Ramirez who is searching for a missing man.
Between them they uncover a trail of dead men who seem to have some connection with each other, but neither can explain how Paige is linked to the trail.

Simon thought he and his wife Ingrid had no secrets from each other, but he was wrong. The reason Paige runs away stems from Ingrid's past, before Paige was born.