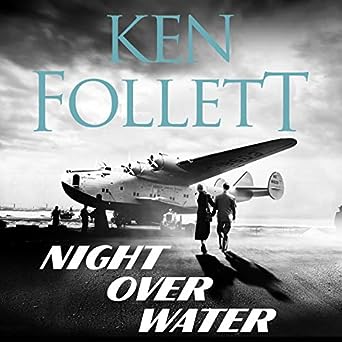 Set during the outbreak of the Second World War, Night over Water is a feat of storytelling from the best-selling master of the historical thriller, Ken Follett.

On a bright September morning in 1939, two days after Britain has declared war, a group of privileged but desperate people gather in Southampton to board the largest, most luxurious airliner ever built - the Pan American Clipper, bound for New York: an English aristocrat, fleeing with his family and a fortune in jewels; a German scientist, escaping from the Nazis; a murderer under FBI escort; a young wife running away from a domineering husband; and a handsome, unscrupulous thief....

War has just been declared and there are a number of people desperate to leave England for America. The novel tells the stories of these people, and why they want to leave, in a number of plot strands. Amid these strands a crew member's wife is abducted and he is under pressure to bring the flying boat down just off the New England coast.

The tension grows as the plane approaches the American coastline, but meanwhile we have learnt a lot about this luxurious airliner, and the details feel very authentic.

There are 15 discs in the set, with each running for a little over an hour. Takes up a lot of listening time.

I could have done without the gratuitous sex which felt a bit sleazy.