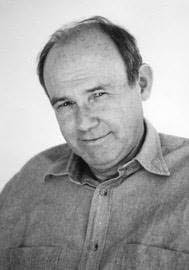 Barry Maitland is one of those authors who may slip beneath the radar.
I'm not sure whether we can really claim him as an Australian author: Barry Maitland was born in Scotland and brought up in London. After studying architecture at Cambridge, he practised and taught in the UK before moving to Australia where he is Professor of Architecture at the University of Newcastle.

I have 3 Maitland books in my database of books read in the last 40 months. There are lots of gaps in my reading but I have no hesitation in recommending you search him out.

ALL MY ENEMIES
ALL MY ENEMIES is the third in Barry Maitland's Brock and Kolla series. Detective Sgt. Kathy Kolla has been successful in her ambition to become one of the officers of the Serious Crime Squad, working with DCI David Brock as her superior, after her stint working with the County police. She is gratified to be called upon by Brock to help in the investigation of a murder one day prior to her official start on his team. A young girl, seemingly without an enemy to her name, has been discovered by her parents, brutally murdered and mutilated, Brock's team sets out to interview her friends, fiancé and workmates in an attempt to find the criminal. Kathy's investigations, aided by the presence of her aunt who has arrived unannounced on her doorstep, lead her to investigate an amateur theatre group. Kolla is put, as is Maitland's wont, into dire physical danger when she encounters as nasty a villain as the author has yet created. #3 in the series.
My rating: 4.7

NO TRACE
In this work Maitland turns his focus on an artistic community where one of the leading artists, Gabriel Rudd, has won England’s most controversial art awards, the Turner Prize, with a painting he completed after the death of his wife. Now his daughter has disappeared, and two other young girls have also gone missing at the same time. Rudd begins to work on an art installation based on the grief he is experiencing for his lost daughter Tracey.
Within a disturbingly unconventional artists' neighbourhood in London, Detective Sergeant Kathy Kolla and Detective Inspector David Brock engage in their most passionate case yet. They need to find six-year-old Tracey Rudd. Tracey is the third child to be abducted in similar circumstances over the past few weeks. Her father, Gabriel, is an infamous artist known best for a work called 'Dead Puppies', and her mother, Jane, committed suicide five years earlier. Jane's parents have accused the self-absorbed Gabriel of neglecting Tracey with much the same abandon as he neglected his wife. Gabriel uses his daughter's disappearance as artistic inspiration to embark on a major controversial artwork - one painting for each day that brings no trace of Tracey. In the meantime, Brock and Kolla's investigations unearth the abductors of the first two girls, but there are still no leads to Tracey. These kidnappers, however, are connected to one of the artists in the neighbourhood, and in turn, everyone in the community falls under suspicion with grotesque consequences. As Kathy tries desperately to understand what motivates Gabriel, Brock's attention is turned necessarily to a new police enquiry, one that targets him. #8 in the series.
My rating: 5

SPIDER TRAP
Spider Roach, his very name a combination of the insect pests that we all hate, is the perfect illustration of the adage that evil breeds evil. Back in the 1980s he controlled the hotbed of gangster land around Cockpit Lane. Now an old man, 20 years on he still controls it - his 3 sons are evil and always have been, and they seem to have married and begotten evil too. Brock had dealings with Roach back in the 1980s and he emerges from retirement in SPIDER TRAP to warn Brock off from his current investigation into the spider's web of evil he has built up over the decades. Two young girls have been found shot dead in Cockpit Lane, a boy is electrocuted as he tries to cross the electrified rail line to get to the nearby waste land where "brown bread" is rumoured to be hidden, and then the police begin to dig up 20 year old skeletons buried in the waste ground. #9 in the Brock and Kolla series.
My rating: 4.7

Barry Maitland's books are great and I've read them all. The other day I picked up his latest, Bright Air, which is a non Brock and Kolla set in New Zealand. I'm looking forward to reading it.

By the way, Barry actually retired from the Uni some years ago, but still lives in the area, in a town just west of Newcastle called ... Maitland!

Thanks Helen. I didn't know he was retired. I saw that BRIGHT AIR was the title of the latest. I'll look out for it. See if my library has heard of it :-)