While I think I have read most if not all Elizabeth George novels, there are only 2 records in my database, meaning I have only read 2 in the last 4 years or so.

Over the last 21 years there have been 13 Inspector Lynley novels:

She won the Anthony Award, the Agatha Award, and France's Le Grand Prix de Literature Policiere for her first novel A GREAT DELIVERANCE, for which she was also nominated for the Edgar and the Macavity Awards. She has also been awarded Germany's MIMI for her novel WELL-SCHOOLED IN MURDER.

Here are my mini- reviews for the 2 most recently read. These two novels got a mixed reception from Lynley fans.

WITH NO ONE AS WITNESS 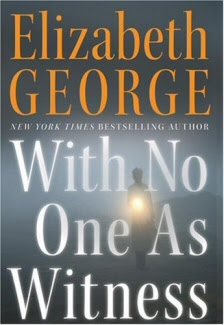 When the Metropolitan Police fail to realise a serial killer is at work, London ignites over the fact that the killer’s victims are young black and mixed-race boys. Institutionalised prejudice is claimed by the community’s activists and tabloids alike. Acting Superintendent Thomas Lynley is given the case, and his Scotland Yard task force is soon handling more killings and a looming tragedy.
Here, Lynley is looking forward to the birth of his first son as his wife, Lady Helen, tries to defuse a potential family feud over the choice of christening clothes. Havers and Lynley live in different worlds a few kilometres apart in the multi-ethnic class-riven stew that is contemporary London.
But they are allies, not only in the fight against crime but also in the struggle with the bureaucracy of New Scotland Yard, as embodied by their assistant commissioner, Sir David Hillier, whose constant meddling hinders rather than helps them on this case.
When the body of an adolescent transvestite is discovered in a park, a connection is finally made to the deaths of three boys found in similar circumstances. Hillier's problem is that the three earlier murders - involving black or mixed-race children - went all but unnoticed. It is only with the demise of a white boy that the connections are finally made, leaving the police open to accusations of institutionalised racism.
My rating: 5.0

WHAT CAME BEFORE HE SHOT HER 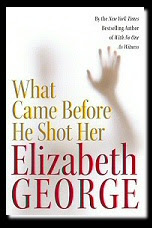 The opening line "Joel Campbell began his descent towards murder…" says it all. Nearly 500 pages traces the downward spiral of Joel and his family in the underbelly of suburban London. This is the twelfth title in the Lynley series which explains how the events in the 11th title came about. Almost a stand-alone, because Lynley never makes an appearance. When their grandmother Glory decides to return to Jamaica she has no intention of taking her grandchildren Joel, Toby and Vanessa with her. Instead she dumps them on her daughter, their aunt Kendra, who is just managing to hold her own life together. In many ways these children are already damaged goods: their father was killed in a case of mistaken identity, Toby was born intellectually different, their mother is in a psychiatric institution, Ness is an angst ridden teenager, and Joel is already feeling the effects of his mixed racial parentage. Despite its depressing story, this book is hard to put down.
My Rating: 4.5

Elizabeth George's website is at http://www.elizabethgeorgeonline.com/
She is often thought to be a British writer mainly because of both the setting and the language/style of her novels. She was in fact born in Ohio, lives in California, but is a frequent visitor to London

I have enjoyed all of Elizabeth George's books except the last one, What Came Before He Shot Her, which I thought was awful. But some of her other books, particularly the ones about Deboarh's desire to have children, are excellent, I think.

However, Kerrie, I do have to say that any Brit reading her would never make the mistake of thinking she is British as she just gets it hilariously off-centre wrong all the time. (Well, I say "no Brit", obviously I don't know, but it is hard to imagine anyone born and raised in the country thinking that it is anything like the way she portrays it).

But I can certainly enjoy the books "as if set in a different universe". Bit like Deborah Crombie, also (though I haven't enjoyed her most recent few compared with the earlier titles).

I remember the uproar over WHAT CAME BEFORE HE SHOT HER Maxine - people protesting about the picture of England that she was creating.

As an occasional visitor to England (I been over about 6 times now) her British "setting" feels true - but then I only see the tourist view although I lived in London for 9 months about 30 years ago. Certainly her writing has a lot more in common with British than American.

Someone left a similar comment a few weeks back as a criticism of Michael Robotham, saying that as an Australian who used to live in Britain, there are glaring errors in his settings/descriptions.

I didn't hate WCBHSH because of its portrayal of Britain (though there were some glaring errors, eg she was unaware of free bus passes, which ruined quite a large part of the main plot element for native Brit (well, London) readers), but becuase the story was so loooooong and the mystery element almost totally absent, and without wishing to give away any spoilers, almost irrelevant.
It was a brave attempt I think to break away from a standard "one of a series" approach, but unfortunately, boring. If I hadn't been commissioned to review it, I would have put it down half way, and I hardly ever do that with books. However, I have enjoyed her previous books very much so I will give her another chance, when her latest is in paperback.

I don't mind the inaccuracies in the portrayal of Britain, I find them quite sweet. But boringness, I cannot forgive ;-)

I was looking at the What Came Before I shot her jacket just yesterday at the store. It made me curious, which is a good thing. Another reason I liked it is I like to look at the author's name (Elizabeth which happens to also be mine) and then imagine my last name, sort of my way of sending my intention out.

Thanks for your comments Maxine and Elizabeth.

It's my impression Maxine that Australia almost bypasses the hardback market (or should I say that the other way around?) Anyway I almost never read anything in hardback. Mostly my books are in the trade paperback size. I find the variation in publication dates world wide interesting. There are some books that we wait ages for, but mostly we seem to get them ahead of at least the US market. Oddly too the Australian printers are Griffin Press which is here in Adelaide.

While I found some of the books by Elizabeth George gripping and extremely powerful (Playing for the Ashes, For the Sake of Elena, In the presence of the Enemy) I have always found it very far fetched that Simon can run a successful forensic pathology service from home, staffed by one (when he is there) with no qualified assistants (apart from Helen when she was alive who seemed to drop specimens to go off shopping after an hours work!). Forensic pathology is now so sub sub specialised, people train for years to perform one small area. Simon seems to be able to complete every type of forensic examination needed. To anyone with any sort of intelligent background it is not believable.

Likewise I am sick of Deborah. Through her amateur detective attempts and emotionalism she has actually caused the death of TWO characters now (don't forget the little girl in In the presence of the Enemy) who she insisted on looking for herself without informing the police. In this latest Believing the Lie, she used the pain she assumed the character Alatea was feeling to once again play detective/get a story to show St James she was capable. This is despicable in the worst tabloid reporter yet she is forgiven by all.