Never visit Midsomer during a Festival! 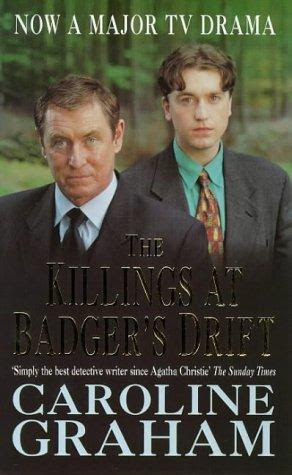 The central character is Detective Chief Inspector Tom Barnaby played throughout the TV series which began in 1997 by John Nettles. Other characters such as his wife Joyce, his daughter Cully, the forensic pathologist George have all been played by the same actors, while Barnaby has had 3 DSs. See the following from Wikipedia.
Wikipedia tells me also that sixty episodes have been aired on TV so far, the 11th series is currently being aired and that there is a series 12 to come. I have no idea which ones I have watched, and I find that even if I have seen an episode before, I can easily watch it again- which I take as a sign of true addiction.

My database contains only one record of a book that I have read in the last 3 or so years and that is for THE GHOST IN THE MACHINE. And it seems from my rating of 3.5 that I wasn't all that impressed.
I think the bit in italics probably came from the blurb of the book (which used to be what I did in my database before I became more confident about writing my own abstracts)
In the village of Forbes Abbot, Dennis Brinkley is the subject of much local gossip as he collects replicas of old war-weapons and torture devices of varying sizes. Paradoxically, one of the collector's war machines crushes him to death. The villagers believe that a freak accident occurred, but his best friend Benny thinks someone is getting away with a homicide. The locals believe that Benny's contention is substantiated when psychic Ava Garrett insists she will ask Dennis to identify his killer at a séance she is hosting. However, before she can call on Dennis, an unknown assailant kills the psychic. Chief Inspector Tom Barnaby and Detective Sergeant Gavin Troy investigate the two homicides.
This took too long to get to the bit where Barnaby and Troy were involved (nearly half the book) and there were too many side plots. Barnaby is getting ready for retirement in 6 months, is Graham too? As usual with Graham, the last chapter gives you a future view, and this gave the impression of having been written in a hurry. I think the editor should have got ruthless with the first half of the book and made her work harder in the second half.

Anyway, review aside, my advice is never to visit the area of Midsomer during a festival! Because that is when murders occur. The probability of being caught up somehow in a murder as victim, witness, or even perpetrator is incredibly high. Besides all they seem to do in Midsomer villages is have festivals. It must be a positive mecca for tourism although sometimes the attendees seem to be very sparse. Just recently I watched one where there was a Literary Festival (Sins of Commission), and it was not really something you or I, dear reader, would have attended. A few rag taggle stalls, the occasional speaker, some fireworks, and of course a murder!

The other thing I have enjoyed about this series is the panoply of actors, some very new to the game, but others well known, very recognisable, who make appearances. The listing at Wikipedia gives lots of lovely detail. The first screen writer was Anthony Horowitz, then Caroline Graham had a dabble herself, and then there have been a variety of them.

There is a Midsomer News page run by a fan too.

LOL Kerrie - they do indeed have a lot of festivals in those villages. I'm addidcted to the TV shows too although I had no idea there were so many of them and I agree the books aren't nearly as engaging. Perhaps, like Cabot Cove, Midsomer is one of those places it's best to observe from afar rather than visit :)

I didn't realize the show came from a book...Thanks for reminding me about the series. Back in the days when we had satellite, I'd watch the show all the time on BBCAmerica.