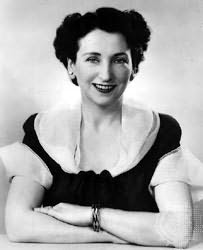 I consulted my little green book (see last week for an explanation) to track down those who have influenced my reading tastes. I discovered that even back in those days when I read rather less selectively, I was beginning to look for crime fiction and thrillers. I remember that I belonged to the Hamlyn "book club" that delivered cheapish books monthly to my doorstep, and among them was often a book by Helen MacInnes.

Now I don't have any records other than title, author, and the date that I read a particular book, so I'm relying on other sources here for content.
The last book I read in 1977 was THE DOUBLE IMAGE by Helen MacInnes whose picture comes courtesy of Fantastic Fiction, a truly wonderful source of information. I remember as Helen MacInnes' novels as similar to Alistair Maclean and Hammond Innes whom I also devoured. They were often about spies and espionage and some of them were made into films. She wrote 23 novels between 1939 and 1984, the last appearing in the year before her death.

From an Amazon review:
DOUBLE IMAGE is one of her best books. John Craig, an American, economic historian while vacationing in Paris,bumps into his old college professor of Archaeology, Mr.Sussman. Sussman , a survivor of Auschwiz, is in a shock having been accosted by an ex-Nazi official,( who has since been declared as a war criminal )on streets of Paris whereas officially has been declared dead over 10 years ago! Craig teels about the experience to his sister, who blurts it out at a party. Next day Sussman is dead, and Police start questioning Craig, French Intelligence Suerete steps in,...the nightmare starts!.
Soon French,Italian,British and American intelligence step in because the man who accosted Sussman is not just an ex-nazi, but much more than that!
The scene shifts to Greek Islands, more people get killed, intelligence agents and the enemy agents try outwit each other, intense struggles and interesting chases.
The story is very interesting and well written, taut, racy and fast paced.

Sadly my local library now stocks only 2 of her novels. I guess if you want to track them down, then you'd best look in Amazon or a UBS for copies. BookMooch is another place to look at - and there are scads of Helen MacInnes titles listed there.

Other titles recorded in the little green book:
NEITHER FIVE NOR THREE (twice! I wonder if I realised I'd read it earlier?)
DECISION AT DELPHI
PRELUDE TO TERROR (again 2x- but 15 years apart)
CLOAK OF DARKNESS