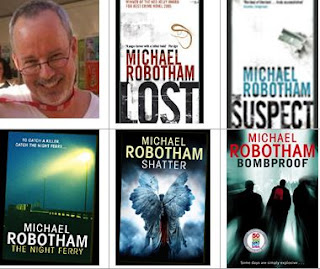 Well near enough, in Newton, at my local library this morning.

The talk, part of the August Books Alive promotion, was billed as Michael Robotham and Kathryn Fox, but unfortunately illness in the family prevented Kathryn from being there.

Michael had already given 47 talks in 36 days in the current Books Alive promotion for which he is the 2008 ambassador. And the free book attached to the promotion is his specially written BOMBPROOF. By the end of today Michael will have given 50 talks in the promotion - one for every book in the Books Alive catalogue.

I was surprised that Michael was not a lot more jaded. He confesses that he has only a vague idea of the geographic location of some of the venues - he sits in the car, goes to sleep, and wakes up on arrival. He does remember that one or two people have said "Kerrie sent me", for which I am very grateful.

As I had expected, he gave an engaging talk, had his audience on side right from the beginning. He filled the audience with background of his changing career as a journalist, ghost writer and now successful author.

He is a man full of stories. He believes that small events, crimes, can impact many people, that suddenly the individual can find himself at the centre of events totally unforseen, simply by being there.

Michael Robotham says he writes psychological thrillers: he's not interested in decapitations, buckets of blood, or serial killers who dice and slice their victims. What interests him is why people do these things. He attributes his interest in the psychology of crime to being mentored by British psychologist Paul Britton upon whom the fictional character Cracker is based. He tells the story of how Paul Britton cracked the Fred and Rosemary West case, and says there's something decidedly "creepy" about Britton who has an intuition he can't turn off.

SHATTER is based on a Paul Britton case, in fact on two cases, one in the UK and a nearly identical one in Australia. SHATTER is about mental forms of rape. Michael sees this as a pure, dark psychological thriller. It is about fear and the imagination. He wanted to pit his protagonist psychologist Joseph O'Loughlin, a brilliant mind, against another brilliant, but evil, mind.
Michael Robotham doesn't know whether he will ever go that dark again. He says writing in the first person as he does, it felt almost like an actor getting into character. When he finishes writing a book he is drained, convinced he will never write again. Until the next "what if" strikes.

SHATTER has now been shortlisted for 4 different awards.
SHATTER isn't a book that Robotham loves, but one that he is very proud of.

Speaking as the Books Alive ambassador, he sees the value of the scheme as assisting lapsed and part-time readers in finding a book that they will enjoy. In BOMBPROOF Michael aimed to write a book that you can't put down - "lock, stock, and two smoking barrels". He realised today that he was speaking to the converted. He tried to turn each person into a missionary to pass their passion for reading on.

From today Michael goes on to Melbourne Writers Festival, where you can catch him twice on Friday. Unfortunately I won't get there until Friday night, in time, I hope, to see him being presented with this year's Ned Kelly Award.

I caught him at Unley library yesterday Kerrie and agree he seemed remarkably amenable for someone at the end of such a long tour. I think I was most interested in what he had to say about why he sets his books in London...how absence from a place makes it clearer in your mind. He talked about when he was living in London he could remember Australia with great clarity, then when he returned here it was London that appeared sharply in his mind.

I hope to be able to catch up with you there tonight!

Some time has opened up so I might be able to attend a couple of other events tomorrow as well whihc is cool.