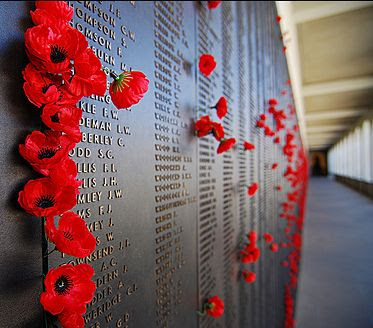 Originally called Armistice Day, this day commemorated the end of the hostilities for the Great War (World War I), the signing of the armistice, which occurred on 11 November 1918 - the 11th hour of the 11th day of the 11th month. Armistice Day was observed by the Allies as a way of remembering those who died, especially soldiers with 'no known grave'.

On the first anniversary of the armistice, in 1919, one minute's silence was instituted as part of the main commemorative ceremony. In London, in 1920, the commemoration was given added significance with the return of the remains of an unknown soldier from the battlefields of the Western Front.

The Flanders poppy became accepted throughout the allied nations as the flower of remembrance to be worn on Armistice Day. The red poppies were among the first plants that sprouted from the devastation of the battlefields of northern France and Belgium. 'Soldiers' folklore had it that the poppies were vivid red from having been nurtured in ground drenched with the blood of their comrades'.

After the end of World War II in 1945, the Australian and British governments changed the name to Remembrance Day as an appropriate title for a day which would commemorate all war dead. In October 1997, then Governor-General of Australia, Sir William Deane, issued a proclamation declaring:

11 November as Remembrance Day and urging Australians to observe one minute's silence at 11.00 am on Remembrance Day each year to remember the sacrifice of those who died or otherwise suffered in Australia's cause in wars and war-like conflicts.

The red poppy – or Flanders poppy – is an international symbol of remembrance for those killed on the battlefield. Its symbolism dates back to Napoleonic times, but its association with WWI and WWII is mainly due to the poem “In Flanders Fields”, written by Canadian medical officer Lieutenant-Colonel John McCrae during WWI:

In Flanders fields the poppies blow
Between the crosses, row on row
That mark our place; and in the sky
The larks, still bravely singing, fly
Scarce heard amid the guns below.

We are the Dead. Short days ago
We lived, felt dawn, saw sunset glow,
Loved and were loved, and now we lie
In Flanders fields.

Take up our quarrel with the foe:
To you from failing hands we throw
The torch; be yours to hold it high.
If ye break faith with us who die
We shall not sleep, though poppies grow
In Flanders fields.

See my other blog for Villers-Bretonneux and ‘L’Ecole Victoria’ (Victoria School).

Thanks for posting this Kerrie.