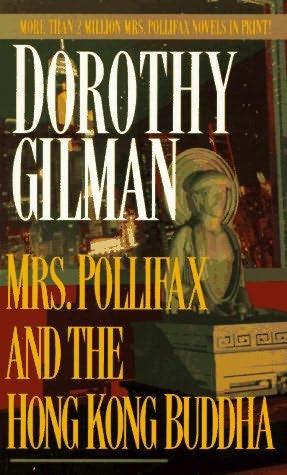 I realise I should have re-read this when I went to Hong Kong on holidays about 4 years back.
However, as usual, all the content of this post is the result of research rather than memory.

Publisher's blurb
Although recently married, Mrs. Pollifax is packed and ready to go to China, where a young agent, Sheng Ti, holds the answers to goings on at the sinister Feng Imports--a one-time agency front. Only Mrs. Pollifax has earned Sheng's trust, and only she can possibly stop what turns out to be a frightening and ominous plot involving drugs, smuggled diamonds, a famous cat burglar turned Interpol agent, a mysterious psychic, and, of course, murder.....possibly her own!


From Wikipedia:
Dorothy Gilman born June 25, 1923 (also known as Dorothy Gilman Butters) is a United States author of mystery and spy fiction. She is most well-known for the Mrs. Pollifax series of spy novels, about spy and grandmother Emily Pollifax, who chooses to become a spy in her 60s, and who stars in fourteen books written over three decades.
Gilman's books tend to feature uncommon, unique characters, often travelling to exotic locales.

I listened to an early one of these last year - she went to Turkey - it was a hoot. I must listen to more - very light but entertaining.

I've listened to an audio version of this book and enjoyed it.

Pollifax is another on my Have meant to get to list...

Along with one of the other FFB offerings with Tom Swift, I'm being taken back to my childhood today. My mother, the avid book and mystery reader, would bring home Mrs. Pollifax books for me to read, and I was hooked. Some great memories there. I should pick one up now to see if I like as well in my more "mature" years.

I've read a few of these but probably not this one.

The Unexpected Mrs. Pollifax is a book I've read a couple of times. I remember just cracking up while reading it at various points in the story. I believe I read a few more books in the series but never continued on. Thanks for reminding me that I should!