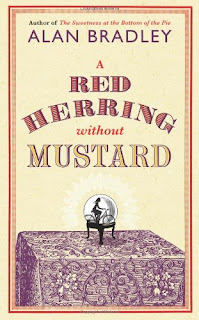 Award-winning author Alan Bradley returns with another beguiling novel starring the insidiously clever and unflappable eleven-year-old sleuth Flavia de Luce. The precocious chemist with a passion for poisons uncovers a fresh slew of misdeeds in the hamlet of Bishop’s Lacey—mysteries involving a missing tot, a fortune-teller, and a corpse in Flavia’s own backyard.

Flavia had asked the old Gypsy woman to tell her fortune, but never expected to stumble across the poor soul, bludgeoned in the wee hours in her own caravan. Was this an act of retribution by those convinced that the soothsayer had abducted a local child years ago? Certainly Flavia understands the bliss of settling scores; revenge is a delightful pastime when one has two odious older sisters. But how could this crime be connected to the missing baby? Had it something to do with the weird sect who met at the river to practice their secret rites? While still pondering the possibilities, Flavia stumbles upon another corpse—that of a notorious layabout who had been caught prowling about the de Luce’s drawing room.

Pedaling Gladys, her faithful bicycle, across the countryside in search of clues to both crimes, Flavia uncovers some odd new twists. Most intriguing is her introduction to an elegant artist with a very special object in her possession—a portrait that sheds light on the biggest mystery of all: Who is Flavia?

As the red herrings pile up, Flavia must sort through clues fishy and foul to untangle dark deeds and dangerous secrets.

I discovered today on Alan Bradley's Flavia de Luce website that there are another three titles planned for this series, and I'm delighted.
I think it isn't just Flavia that I like but also the cast of characters that populate the novels. Even her bicycle Gladys is imbued with character. There are some people like Mrs Mullet, Dogger, the vicar, and the police inspector who persist from novel to novel, and then new characters that are very creatively draw.

There are those such as her older sisters who treat her appallingly, but perhaps little different to the way adolescent girls treat their younger sisters. Flavia is precocious at the same time as being ingenuous and incorrigible. She knows how to wheedle information out of older people, and even from members of the household and the family. And from title to title Flavia learns a little more about her dead mother and her own place in the little community of Bishop's Lacey.

The plot of A RED HERRING WITHOUT MUSTARD in a way seems a bit more complex than those of the earlier two titles, but the plotting is tight, and there are enough puzzles to keep the reader thinking.

These are cozies worth reading in order, in fact, make sure that you read them in order.

Other reviews to check
My reviews of earlier novels:
4.8, THE SWEETNESS AT THE BOTTOM OF THE PIE
4.5, THE WEED THAT STRINGS THE HANGMAN'S BAG

I've just read Alan Bradley's fourth Falvia de Luce for crimesquad.com and it was a delight. Very enjoyable and it made me laugh too.

Thanks Sarah. I'll keep a look out for it

Working my way through #3 and #4 right now -- great to see your review here. I love how we see Flavia through her own narration but also get glimpses of her through others' eyes which gives us a more well-rounded view. She is such a plucky little soul!

I need to get back to this series - I love Flavia!