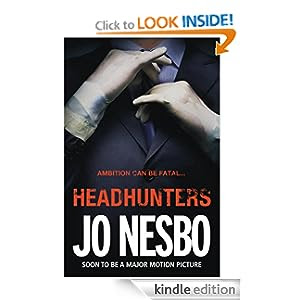 Roger Brown has it all. He's the country's most successful headhunter. He has a beautiful wife and a magnificent house. And to maintain this lifestyle, he's also a highly accomplished art thief.
At a gallery opening, his wife introduces him to Clas Greve. Not only is Greve the perfect candidate for a position with one of Roger's high-profile clients, he is also in possession of 'The Calydonian Boar Hunt' by Rubens, one of the most sought-after paintings in the world.Roger sees his chance to be rich beyond his wildest dreams and starts planning his boldest heist yet.
But soon, he runs into trouble - and this time money is the least of his worries...

Norwegian crime fiction writer Jo Nesbo is well known to us for his Harry Hole police procedural series. I have read and reviewed a number of them (see the list below).
HEADHUNTERS is a stand-alone, not a Harry Hole title.


Roger Brown, the headhunter who has never nominated a candidate for a job he did not get, who if necessary manipulates, forces, levers and rams the candidate in, who has clients who trust his judgement implicitly, who without a moment’s hesitation place their company’s fate in his – and only his – hands.

Roger's problem is that he leads a lifestyle that demands an income well beyond what he actually earns, but Roger has come up with a ploy by which he supplements his income by stealing from the people he interviews.

In the interviews Roger uses a nine-step model developed by American police investigators designed to lead to confession. In Roger's case he wants the person being interviewed to come to realise how unsuitable he is for the job. The rare interviewee who does not, is the one who is suitable for the job. In the process Roger discovers what assets the person has that might be worth stealing. When a theft takes place the finger of suspicion never points back to Roger because he has other measures in place.

HEADHUNTERS begins at a very sedate pace and in fact had me wondering why I was reading it. I know some readers who give a novel 20 or 50 pages to ramp up. If it hasn't grabbed their interest, or they can't see where it is heading, then they abandon it. They might easily have done so with HEADHUNTERS. But it is not in my nature to abandon ship and my persistence was rewarded when, at 20% into the novel, Roger interviews Clas Greve. Greve appears to be very clever, able to turn the tables on Roger. From that point on the action ramps up and we are reading a fast moving thriller.

This is a very clever novel. Although the cards are all on the table, in fact some of what the reader is told is ambiguous and there are a number of red herrings. I particularly enjoyed a scene towards the end where the police investigator gives an extended television interview in which he explains the events for the benefit of the audience. It reminded me of a Hercule Poirot denouement, except that HP doesn't usually get it wrong.

HEADHUNTERS isn't Nesbo's best novel, and I'm not sure I ever want to read about Roger Brown again, but it is still top level crime fiction.

Reviews on MiP of Nesbo books
NEMESIS
THE REDEEMER
5.0, THE SNOWMAN
4.8, THE LEOPARD

Glad you liked this, I was beginning to feel in a minority of one! Jo Nesbo often goes for the slow starts, doesn't he, but there are quite a few clues embedded within so one has to read closely! I don't suppose he will write again about this character; I think he wrote this book as a one-off for a charitable cause, or something like that. Roger is very different from Harry, it must have been a nice change for the author.

I actually too, quite liked this book, however due to unavailability of translations, I have only read 2 of the Nesbo books, so did not mind the departure of Harry for this one. I also felt it was a small insight into the headhunter world, and the psyche of this character, even though I did not like him, myself. Can't wait to read more.