Review: THE GIRL IN THE ICE, Robert Bryndza 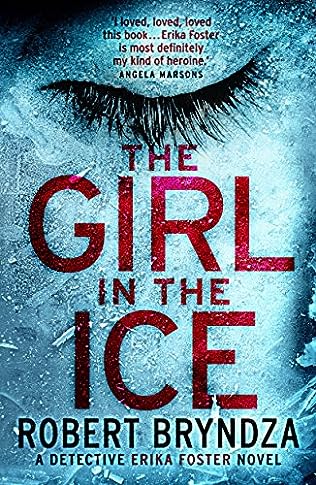 Her eyes are wide open. Her lips parted as if to speak. Her dead body frozen in the ice...She is not the only one.

When a young boy discovers the body of a woman beneath a thick sheet of ice in a South London park, Detective Erika Foster is called in to lead the murder investigation.

The victim, a beautiful young socialite, appeared to have the perfect life. Yet when Erika begins to dig deeper, she starts to connect the dots between the murder and the killings of three prostitutes, all found strangled, hands bound, and dumped in water around London.

What dark secrets is the girl in the ice hiding?

As Erika inches closer to uncovering the truth, the killer is closing in on Erika.

The last investigation Erika led went badly wrong...resulting in the death of her husband. With her career hanging by a thread, Erika must now battle her own personal demons as well as a killer more deadly than any she's faced before. But will she get to him before he strikes again?

This is the debut novel in what is quite a long series (see below). I read DARK WATER first and that made me determined to follow this author, and indeed I plan to read all the series.

This debut novel begins with Detective Erika Foster returning to work, so there is quite a bit of back story to catch up on.

In some ways it is typical police procedural with plenty of noir thrown in. At one stage Erika crosses her boss who is having strings pulled by some influential people, and she is taken off the case.  Erika feels an obligation to the victims she has discovered and continues her investigation unofficially, putting herself in great danger.

About the author
Robert Bryndza was born in the UK and lived in America and Canada before settling in Slovakia with his Slovak husband Ján. His debut novel The Not So Secret Emails of Coco Pinchard became an Amazon bestseller.

When he's not writing Rob is learning Slovak, trying to train two crazy dogs, or watching Grand Designs all in the hope that he'll be able to understand his mother-in-law, build his dream house, and get the dogs to listen.