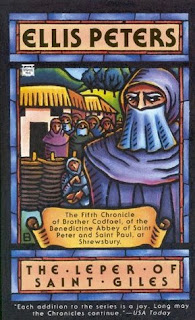 Setting out for the Saint Giles leper colony outside Shrewsbury, Brother Cadfael has more pressing matters on his mind than the grand wedding coming to his abbey. Yet as fate would have it, Cadfael arrives at Saint Giles just as the nuptial party passes the colony's gates. He sees the fragile bride looking like a prisoner between her two stern guardians and the bridegroom, an arrogant, fleshy aristocrat old enough to be her grandfather. And he quickly discerns this union may be more damned than blessed.

Indeed, a savage murder will interrupt the May-December marriage and leave Brother Cadfael with a dark, terrible mystery to solve. For the key to the killing - and a secret - are hid among the lepers of Saint Giles.

Now Brother Cadfael's skills must ferret out a sickness, not of the body, but of a twisted soul - in the fifth Brother Cadfael Chronicle, a work that displays Ellis Peters' special genius at her best.

The war between Maude and Stephen fades into the background and other social elements absorb our attention: the presence of leprosy in England, the legacy of the Crusades, and the convention of marrying young women to elderly men.

The plot was a bit predictable although when the murder occurred the identity of the murderer was not obvious. Cadfael uses both his skills of deduction and a little intuition to solve the case.

The narration was a good solid effort but at times the voice was a bit soporific.