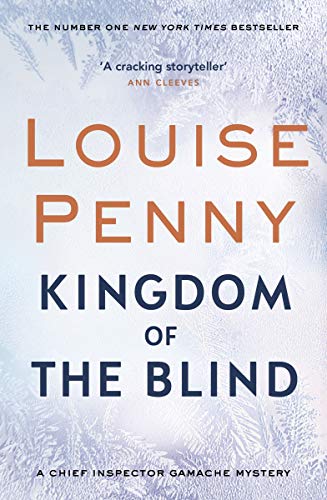 When Armand Gamache receives a letter inviting him to an abandoned farmhouse outside of Three Pines, the former head of the Sûreté du Québec discovers that a complete stranger has named him as an executor of her will.

Armand never knew the elderly woman, and the bequests are so wildly unlikely that he suspects the woman must have been delusional - until a body is found, and the terms of the bizarre document suddenly seem far more menacing.

But it isn't the only menace Gamache is facing. The investigation into the events that led to his suspension has dragged on, and Armand is taking increasingly desperate measures to rectify previous actions. As he does, Armand Gamache begins to see his own blind spots - and the terrible things hiding there . . .

What better way to end my year's reading than with an excellent novel in a much loved series by a much loved author? I was worried that I wouldn't remember enough of what happened in the previous title in the series, which had brought Armand Gamache to his current situation, suspended from his position of head of the Sûreté du Québec. But the author takes such good care of the reader, with gentle reminders and subtle re-capping.

As with so many books in the series, we have a dual headed plot. At the end of the previous novel Gamache had taken the decision not to prevent the release of a new drug into North America and Canada. The cartel which has possession of the drug has not yet released it and Gamache has been suspended and is undergoing investigation. Most of the drug shipment has been recaptured but there is still some in Montreal still to be found. Its release will have disastrous consequences.

Almost a light relief, the second main plot sees Gamache and two others named as "liquidators" (executors) in the will of a woman whom he is convinced he has never met. "Baroness", Bertha Baumgartner, has left a bizarre will, based on a family legend that involves millions, some property, and a title, none of which seem to exist.  In the process of investigating the background to the will, Gamache uncovers embezzlement and corruption at breathtaking levels.


An excellent read. I'm not sure whether there will be another in this series. If not, what a fitting conclusion!

As you'll see from the list below, I have read all the novels in this series.
My recommendation - read them in order! You won't regret it.
My average rating is just under 5.0.

Part of what has kept me reading the series is the excellent characterisation. Each of the characters has been built up carefully with wonderful descriptions, not hte least Gamache himslef.