Review: THE VIRGIN IN THE ICE, Ellis Peters - audio book 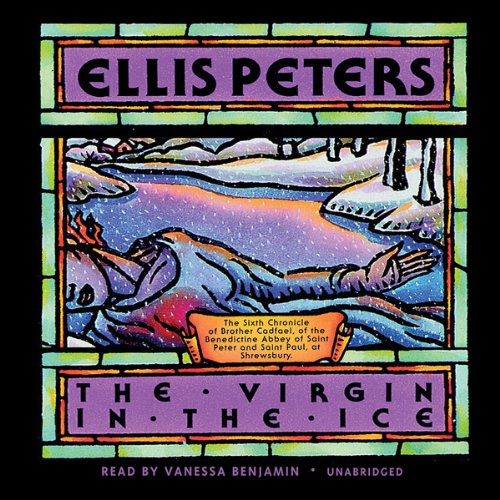 The winter of 1139 will disrupt Brother Cadfael's tranquil life in Shrewsbury with the most disturbing events. Raging civil war has sent refugees fleeing north from Worcester. Among them are two orphans from a noble family, a boy of thirteen and an 18-year-old girl of great beauty, and their companion, a young Benedictine nun. But the trio, never reaching Shrewsbury, have disappeared somewhere in the wild countryside.

Cadfael feels afraid these three lost lambs, but another call for help sends him to the Church of Saint Mary. A wounded monk, found naked and bleeding by the roadside, will surely die without Cadfael's healing arts. Why this holy man has been attacked and what his fevered ravings reveal soon give Brother Cadfael a clue to the fate of the missing travelers. Now Cadfael sets out on a dangerous quest to find them. The road will lead him to a chill and terrible murder and a tale of passion gone awry. And at journey's end awaits a vision of what is best, and worst, in humankind...in Ellis Peters's most stunning depiction yet of love and war.

If you've not yet embarked on these historical mysteries, take my advice and read them as far as possible in publication order. That way you will be aware of political developments on the larger canvas of the Maude/Stephen civil war, and also of character development within the novels themselves.

A group of three has disappeared on the way from Worcester to Shrewsbury and there is an alert out for them. To make matters worse the weather is getting cold and the snows are coming. Bands of brigands are roaming the countryside, and travellers are not safe.