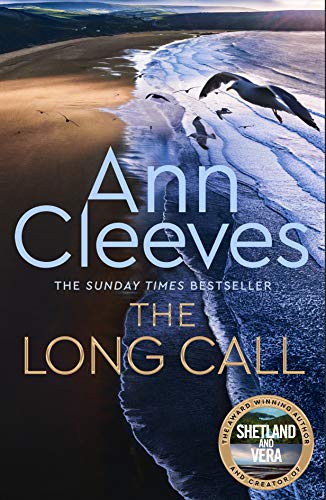 The Long Call is the latest novel from Ann Cleeves, and the first in the new crime fiction series, Two Rivers, which has been eagerly awaited by fans of her bestselling Shetland and Vera Stanhope series. Here, Ann introduces Detective Matthew Venn and tells us about the inspiration behind Two Rivers.

Set in North Devon, where the rivers Taw and Torridge meet, Two Rivers is the new detective series from Ann Cleeves, the author of the Shetland and Vera Stanhope series which both inspired hugely popular television adaptations. When Detective Matthew Venn turned his back on the strict religious community he grew up in, he lost his family too. Now he’s back.

The first book in the series, The Long Call, sees Matthew return to the Two Rivers region as his father’s funeral takes place, not only to mourn him from afar but to take on his first major case in the area. A man has been found stabbed to death on a beach near to Matthew’s new home, and his team’s investigation leads straight to the heart of the community he left behind, all those years ago.

The Long Call has already been optioned for TV by Silverprint Pictures, the company which produced Shetland and Vera.

Set in North Devon near Barnstaple with a new detective Matthew Venn, married to Jonathon Church who has set up and manages The Woodyard, a centre offering, among other things, learning disability services.

The body found on the beach is identified as an ex-soldier who has been volunteering in the kitchen at the centre.

The novel opens with Matthew Venn watching his father's funeral from a distance, long estranged from his parents when he chose to leave the Brethren in his first year at university.

This new series has given Ann Cleeves scope to create interesting new characters and different settings.

So there is a lot of background to learn, a new police investigative team, and then some interesting plot threads.

I have followed Ann Cleeves since first reading the first novels in the Shetland series, and then meeting Vera Stanhope. I look forward to reading the second in this new series.