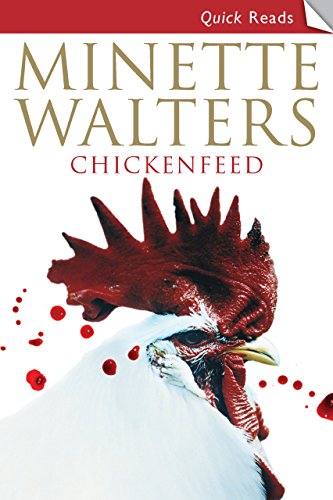 When Minette Walters was commissioned (along with several other writers) to produce a book in the Quick Read series, she came up with a novel called Chickenfeed, firmly in her chosen territory: the psychology of crime and criminals. The brief was to keep things fast-moving, with no unwieldy adjectives and (if possible) seduce into reading those who have either lost--or had never acquired--the habit. Ironically, Chickenfeed, despite its brevity, reads very much like Walters' customary fare: a violent crime is committed (offstage, as it were), but the concentration is on perpetrator and victim rather than a dogged police inspector putting the pieces together.

The subject is a true story: in 1920s East Sussex, the corpse of Elsie Cameron is discovered in a chicken run. The man found guilty of the crime, her fiancé Norman Thorne, was sentenced to death and hanged. At the time of his death, doubts were cast on the verdict, and it is very much Walters' concern to address those doubts here. We're given a fascinating and detailed study of two blighted lives: Norman, living under cramped conditions, is struggling against heavy odds to make a living as a chicken farmer. The unprepossessing Elsie, prickly and self obsessed, finds it difficult to get on with her family or her workmates, and is fired from a succession of jobs. Marriage to Norman is the one thing--she comes to believe--that will change her wretched life, but although she does her damnedest to get the reluctant Norman to marry her, she withholds sex, allowing Norman to undress her and touch her naked body, but forbidding any other sexual contact. Things grow worse, as Elsie's family (keen to rid themselves of her) join their daughter in pressing marriage on the increasingly reluctant Norman. Then he meets someone else... and Elsie disappears.

A quite lengthy novella. Based on a true case from 1924 when Norman Thorne was convicted of murdering his fiance Elsie Cameron.

To the end Norman swore that he had found Elsie dead, hanging in his shack. His conviction was based on the testimony of Sir Bernard Spilsbury.

Minette Walters has reconstructed evidence over their four year courtship when Elsie had tried to bring on the marriage by claiming she was pregnant. Norman always said she couldn't be and eventually the autopsy showed that she wasn't.