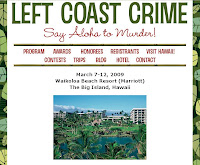 This post also harks back to an earlier one, about where you will be able to find me in attendance.

And next year, Left Coast Crime being held in Hawaii 7-12 March 2009. Have booked the flights, paid the registration, and now have done the accommodation.

We worked out there are 8 of us that we know of, from downunder, including 3 spouses. Roughly we are Oz members of 4MA, and nearly all participants in oz_mystery_readers.

So if you happen to find this blog and are going to LCC2009, leave a comment so we can keep in touch.