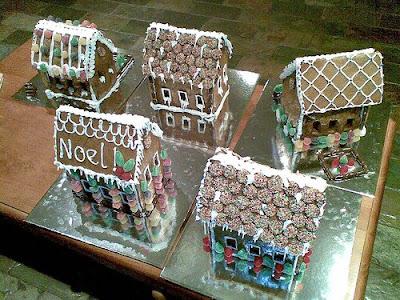 We know Christmas is not far off when the daughters get into gingerbread house mode. Click on the image and enjoy the slide show.

If you are one of those who likes to get into the spirit of the season by reading a book with Christmas connotations, then in my next few blog postings I'm going to list some crime fiction titles for you to look out for.

AGATHA RAISIN and KISSING CHRISTMAS GOODBYE, M. C. Beaton, rating 3.0
Phyllis Tamworthy, about to celebrate her 80th birthday, contacts Agatha Raisin because she thinks someone from her family will try to murder her at her birthday celebrations. And they do - Mrs Tamworthy dies of hemlock poisoning despite the fact that Agatha is on the case, and actually staying in the manor house! That's enough to raise any female PI's dander. Phyllis Tamworthy was universally hated by her family and all the villagers, so the list of suspects reads like the local telephone directory.
The author just managed to retain my interest in the whodunnit side of this story, but I came close to not finishing the book when it side-tracked to Agatha Raisin's plans for the best Christmas celebrations ever. I can't get away from the feeling that these books are meant to be a spoof on the village cozy, but there is so little in them that I find amusing. The author does far too much "telling". The reader is never in a position to solve the mystery because not all the salient facts are at their disposal. There are occasional glimpses of good characterisation - perhaps the fact that I find Agatha Raisin so detestable is evidence of that - but there are others who are mere caricatures. The fact that KISSING CHRISTMAS GOODBYE is the 18th in the series is probably indicative that someone out there likes them, buys them, reads them, but perhaps not me.

WATER LIKE A STONE, Deborah Crombie, rating 4.8
The first Christmas with your partner's parents is never an easy one, and Gemma James is not sure she is looking forward to the one that she and Duncan Kincaid and their two boys will be spending with his parents in Cheshire. However on the eve of their arrival, Duncan's sister Juliet finds the mummified body of a baby concealed in the wall of a barn she is renovating, and everything takes on a different twist. Duncan finds the investigating officer called to the scene is someone he was at school with. Despite the setting in the small Shropshire town where Duncan Kincaid grew up, WATER LIKE A STONE has a big canvas feel to it. There are a number of threads, at least one murder, a couple of mini-mysteries to be solved, and plenty of action, all taking place in the holiday season of Christmas to New Year. Most enjoyable read. #11 in the James/Kincaid series

CITY OF LIES, R.J. Ellory, rating 4.3
Until a week before Christmas John Harper living in Miami had thought he was an orphan. That was when he got a phone call from his Aunt Evelyn stressing that it was important he get to New York city as soon as he could. It has been 17 years since he left New York and now he learns that Lenny Bernstein, the father he had thought dead for 30 years, is lying in a Manhattan hospital critically wounded in a liquor store hold up. At the hospital Harper meets up with an old family friend whom he had always thought of as Uncle Walt.
A little faster than John, the reader learns that things are not what they seem. There is a vortex of evil that slowly begins to suck John Harper in as he struggles to understand who his father actually is, and the events rush towards a climax that will mean death for many. I liked the pace at which this book moved, but I did have a problem in seeing John Harper as a real person. In my opinion too there were a couple of improbabilities, and a couple of loose ends- but I am not going to spoil your reading by talking about them here.

A QUIET BELIEF IN ANGELS, R.J. Ellory, rating 5
Death took Joseph Vaughan's father in the summer of 1939 just after Joseph, 11 years old, had picked up a long slender white feather, perhaps from an angel's wing. Death came that day. Workmanlike, methodical, indifferent to fashion and favor; disrespectful of Passover, Christmas, all observance or any tradition. Death came - cold and unfeeling, the collector of life's taxation, the due paid for breathing.
In the following years Death visits the small community of Augusta Falls where Joseph lives with his mother, many times, as a serial killer who takes the lives of young girls after doing unspeakable things to them. At school Joseph learns of unbelievable events happening in Europe through the evil of Adolf Hitler, and when after Pearl Harbour America goes to war, the murders of the young girls continue, all girls that Joseph knows well. Joseph organises a young band of vigilantes who call themselves The Guardians, but they can do nothing, and when the latest victim is a young Jewish girl, the community of Augusta Falls turns on non-Americans, including the Krugers who live next door to Joseph and his mother. These deaths dominate the path that Joseph Vaughan's life takes and what happens to the Krugers is nothing to what will happen to Joseph Vaughan.

MURDER IN THE DARK, Kerry Greenwood, rating 4.5
#16 in the Phryne Fisher series. It is the end of 1928. We celebrate Christmas with Phyrne and her family and then she is off to the Last Best party of 1928, being held by the Golden Twins, Isabella and Gerald Templar. The party is a 4 day event being held at Werribee Manor outside of Melbourne. Someone tries to dissuade Phryne from going, but that of course makes her more determined to be there. Once the party gets underway there is plenty to keep Phryne occupied, including cryptic threatening notes, an extravaganza of activities for rich young things, the kidnapping of a child, and the discovery of one that has been kidnapped and belongs to no-one.

CHOCOLAT, Joanne Harris, rating 4.5
Vianne Rocher, with her small daughter Anouk, arrives at a small French village on a festival day leading up to Christmas. She decides to stay and sets up a chocolaterie in the square directly opposite the church. As Lent approaches the village priest identifies her as a corrupting influence, confirmed in his mind when Vianne decides to have an Easter Chocolate Festival. Is this a mystery book? - some would say not - but there is plenty of mystery, even an old case of murder - and who is the old priest in a coma whom Father Reynaud visits on such a regular basis? Is Vianne herself who she thinks she is? I read this as a BBC Audiobook on 8 CDs, beautifully read by Juliet stevenson.

I have to catch up in the Deborah Crombie series! I loved the 4th one in the series so much. I have some Agatha Raisin but haven't read any yet. I think I got them because we were watching the other mystery series MC Beaton wrote, the Hamish MacBeth series, on tv with Robert Carlyle starring. I haven't read them though, they're on my TBR shelf. Which coincidentally looks rather like yours!! lol Have you tried Ian Rankin, the John Rebus series set in Scotland? one of my favourite series. Black and Blue is one of the best in it (if you are looking for a new author, that is!)....we'll have to exchange author notes some day. I'm going to go through your blog now to catch up on it. by the way, tell your daughters they are queens at doing gingerbread houses. Mine all fell down last year when we tried to decorate them! I obviously need more work at putting them together!!

I've never read anything by any of these authors before except for Harris. I loved Chocolat.

Ah, gingerbread houses - I have fond memories of those. My mum made me one for my 8th birthday.