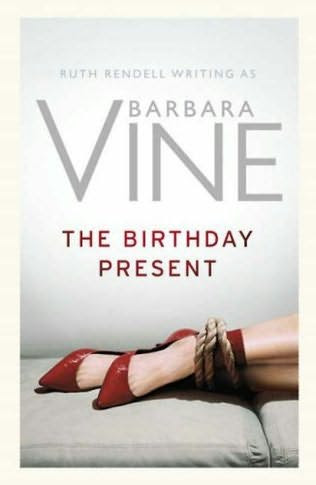 MP Ivor Tesham's secret affair with stunningly beautiful housewife Hebe Furnal comes to an abrupt end when she is killed in a car accident. Hebe was only in that car because Ivor had her snatched from the streets in a mock kidnapping, designed to spice up their encounter later that night. The kidnapping/adventure is Hebe's birthday present.

The police investigation after the accident comes to the conclusion that Hebe is the victim of mistaken identity. There is no linking at the time between Ivor and Hebe although there are those who know bits of the truth. For the moment Ivor's meteoric rise in Parliament is unchecked, even when his next girlfriend is the the former lover of the other passenger in the car, who was also killed. But five years later things start to unravel.

The main narrator of THE BIRTHDAY PRESENT is Rob, Ivor's brother in law. I actually found him a very annoying narrator, taking far too long to spill the beans, parsimonious with the truth. He is telling the story retrospectively, there is no doubt that the whole story is all over, but he goes about it in an exasperatingly long winded fashion.
There is a secondary narrator, Jane, Hebe's girlfriend, the source of her alibis when Hebe, a married woman with one child, has an assignation with Ivor. Jane has a sense of foreboding and keeps records on sheets of paper which she keeps in a shoebox in her flat.

There was a point about 70 pages from the end when I wondered why I was still reading THE BIRTHDAY PRESENT. There is a lot of minutiae that feels like the basic story is being padded out. I think perhaps it would have made a good short story or even a novella, and I understand that Barbara Vine wanted to explore the intertwining of relationships between the characters, but I think she really milked this scenario for all it was worth. There's a lot of detail supplied by Rob, in keeping with his pedantic longwindedness, about his family, his children, and how he and his wife Iris are devoted to Ivor. The second narrator Jane, a rather unstable character, similarly supplies details about her relationship with Hebe, and then later with Hebe's widowed husband.

Barbara Vine won an Edgar Award for Best Novel in 1987 for A DARK ADAPTED EYE.

Barabra Vine is a pseudonym for Ruth Rendell.

Rendell/Vine is perhaps the modern crime author I admire most, but I have read some negative reviews of this book (which I haven't read yet.) Some suggest that the book was adversely affected by a political slant - was that your impression, Kerrie?

I found the politics bit a tad tedious Martin. The main narrator tells you (apologetically) right from the beginning that this story takes place against a political background, and what follows probably means more to a British voter than it does to me, being on the fringes of that political horizon so to speak. The MP who is the centre of the story is not really a very nice person although he has people who are devoted to him. He is constantly looking at his own survival and his own reputatiion and whether the press will find out about his connection to the birthday gift incident.

Thanks for the review, Kerrie. I trust your judgment, so I'll probably continue reading her older books before I rush to read this one.

As I'm a great Barbara Vine fan, I will still buy this one, though I'm less interested in politics than in some of the other subjects she's written about. I still have two unread Vine novels, so will work on those while waiting for this one to come out in the US, and maybe get this one from the library. Thanks for leaving me this link!