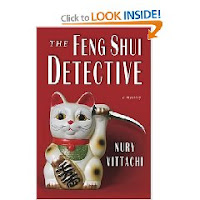 An Australian 17 year old from Sydney, looking for somewhere to spend her summer holidays is not really Mr Wong's idea of an ideal assistant, particularly when he doesn't really need one. Not only is she female, loud, not Chinese, but she speaks a language he doesn't understand. C.F. Wong is persuaded to take Jo McQuinnie on as a favour to her father, who is by way of being a client.

Mr Wong is a geomancer, a feng shui expert, whose Singapore operation is very small, just two rooms, and just himself and his secretary Winnie Lim. Jo McQuinnie wants to shadow Mr Wong, to spend her summer observing him, and learning about the practice of feng shui.

The reader is introduced to Nury Vittachi's quirky sense of humour early on:

The neighbourhood was temporarily woken at seven o'clock by a minor emergency: a small fire in the building opposite, apparently caused by a joss stick falling out of a shrine dedicated to the God of Safety, according to the watchman. Sirens shook the buildings until a fireman arrived to find an elderly Buddhist nun had stamped out the fire with her bare feet - hard calloused hooves which were quite undamaged by the harsh usage.

Jo and Mr Wong are an unlikely team, she a lively foil to his more sedate approach to life, and the combination works. Very different style of books I know, but I couldn't help thinking of Colin Cotterill's Dr Siri Paiboun in THIRTY THREE TEETH and other titles.

The structure of the book is interesting too. Each short story is preceded by an old Chinese tale, often related to the practice of feng shui. On the following page is Mr Wong's modern distillation of the old tale. The short story that follows is related somehow to this distillation.

If you know nothing about feng shui are you going to enjoy THE FENG SHUI DETECTIVE? Well, having read the book, my knowledge of feng shui is still at best rudimentary. But I found each story posed an intriguing puzzle. Vittachi pokes fun at a variety of things: Mr Wong's attempts to understand his young assistant's language, the food presented to Jo, the ways in which the practice of feng shui is used, while still giving the reader glimpses of local culture.

About Nuri Vittachi (from his blog)
NURY VITTACHI (also known as MISTER JAM), ... one of Asia's most widely published writers. New pieces are printed every week-day. His writings appear first in the printed press, and then on [his blog].
He has tens of thousands of books in print in many languages under various names and has been on television hundreds of times.
Hong Kongers are more familiar with "Mr. Lai See", people who follow the news media know "Nury Vittachi", young people at school know "Sam Jam the Story Man", and people who read columns in magazines know "The Spice Trader" or "the Travellers' Tales" man.