Review: THE POISONING IN THE PUB, Simon Brett 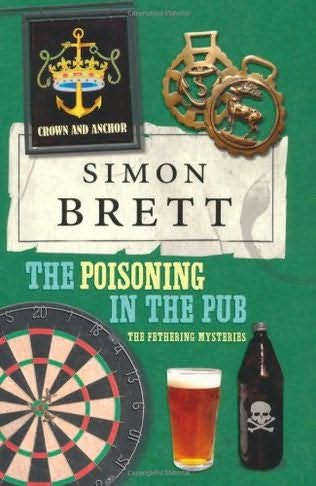 The latest in the Fethering series, #10, proves that Simon Brett hasn't lost his touch.

Some nasty things begin to happen at Ted Crisp's Crown & Anchor starting with a radical food poisoning at lunch one day when Jude and Carole are there. The pub is temporarily closed by the health authorities, and the story is leaked to the paper. Then a one-of comedy night intended to boost the pub's flagging reputation becomes a disaster when the comedian tells some off colour jokes about Ted and the food poisoning, a gang of bikies invade, and then one of Ted's helpers is killed. Jude and Carole become convinced that someone is trying to force Ted to sell up, and he confirms that this is just part of a stream of nasty incidents.

Some books are just so easy to read, you wish there were more of them. The Fethering series is one of my favourites, and Simon Brett is still going strong. If you've not read any, then they are definitely worth reading in order. They feature Carole Seddon, retired public servant with all sorts of hang-ups, and her neighbour the mysterious Jude, an expert in massage and natural therapies. There is a lovely development of the relationship between the two, and reading Brett's annual contribution is another case of visiting with old friends.

See what else I have blogged about Simon Brett, including his earlier Charles Paris series.
It is books like these that convince me that reading cozies is really what I should be doing all the time!

MURDER IN THE MUSEUM - A Fethering Mystery (Audio)
An Audio CD produced by ISIS Audio books, 8 hrs 30 mins, read by the author. I have already read the book, soon after it came out, but that didn't prevent my enjoyment of this reading, listening in 20 min gobbets driving to and from work. Bracketts, once the home of poet Esmund Chadleigh, is an Elizabethan house, now a museum devoted to the remembrance of Chadleigh. Carole Seddon, retired public servant, becomes a trustee on the board of Bracketts, but board meetings are complicated by the discovery of a skeleton in the kitchen garden. Carole and her neighbour Jude become involved when there is a shooting in the house car park. Obviously Bracketts has secrets some one is keen to keep hidden. I am an addict of Simon Brett's writing, converted by reading the Charles Paris series, but I also think he is a very skilful reader.

THE HANGING IN THE HOTEL
Suzy Longthorne is in a bind and she desperately needs help. Her once exclusive hotel is in need of a cash flow. After the events of September 11 she has seen bookings at her hotel drop, so in order to make good on her investment she has opened the doors of the Hopwicke Country House to the general public.
She is currently hosting a meeting of the Pillars of Sussex, an exclusive gentleman's group of business and community leaders from the area. They tend to get a bit rowdy after drinking and Suzy is short-staffed so she goes to her dear old friend Jude to see if she can help waitress the party. Jude accepts and gets more than she bargained for.
While at the hotel Jude is frazzled with all the many chores she has to do, working as a waitress, bartender, and a maid Most of the members of the Pillars of Sussex are lushes and sexist and she is forced to deal with them. She even helps a prospective member of the group back into his hotel room after he falls drunk outside. He regales Jude with all his dreams and aspirations as he hopes to join the men's organization. When, on the very next morning, he is discovered hanging from the bedpost everyone is convinced that it was suicide. All except for Jude. The man had lots of dreams and was planning on doing some great things. The last thing on his mind was suicide; Jude is convinced of it. So why is everyone in a rush to call his death suicide?
THE HANGING IN THE HOTEL is the latest alliterative entry in the English village of Feathering mysteries. The British cozy mystery series is filled with light humor, colorful characters, and outrageous situations from the lead characters in the story. Jude is a free-spirited and determined middle-aged woman who will find out the truth into the death and even involve her straight-laced neighbor Carole Seddon to help her.

THE WITNESS AT THE WEDDING
Carole Seddon's son, Stephen, is about to be married. But as plans for the day get underway, his fiancee, Gaby, and her parents, Marie and Harold, seem desperate to keep the affair as discreet as possible. However, after a quiet engagement party, Harold disappears...only to be found dead the next day, in a burnt out car in Epping Forest. As the family deal with their grief, Carole begins to suspect that they are also hiding secrets that can be traced back thirty years, to the murder of Marie's best friend.
It also transpires that the killer, Michael Brewer, has recently been released from prison, and is back in his old stomping ground, Fethering. When Gaby returns to her flat in London, she hopes she will be able to focus once more on the big day. But here she narrowly escapes the clutches of Michael Brewer, on the run from his parole duties. With Gaby fearing for her life, Carole and Jude must attempt to discover the killer's motives before he makes another deadly move...Will the wedding day go without a hitch?

THE STABBING IN THE STABLES
#7 in the Fethering series. Jude arrives at a local stables to work on healing a horse to find the co-owner of the stables, Walter Fleet, stabbed to death in the horseyard. Jude has the impression that someone has just left the exercise yard, as a back gate slams shut. I enjoy these variants on the cozy village theme featuring Carole Seddon, retired public servant, and her neighbour Jude, healer, yoga teacher etc. Jude and Carole can't resist investigating this murder right on their doorstep. In addition there appears to be someone, known locally as the Horse Ripper, injuring mares. Young Imogen Potten is convinced that the horse that she exercises at the stables is a potential target. Jude enjoys introducing Carole to the delights of gambling at the races. Nothing startling about this book - just a comfortable, cozy read.

DEATH UNDER THE DRYER
These cozies involving retired Carole Seddon and her neighbour Jude are not everyone's cup of tea, but this title is as good any of the others. Connie is the hairdresser in Fethering. Carole and Jude become involved when Carole's assistant Kyra is found dead in the back room of the shop. Carole is the first appointment for the day and Kyra should have opened the shop up. Connie the hairdresser arrives late, lets Carole in, and then discovers the body when she goes to make Carole a cup of coffee. Kyra's boyfriend Nathan becomes the prime suspect when he appears to be missing. Carole and Jude of course become involved - they just can't help themselves. The story involves Nathan's eccentric family and leads Carole and Jude a little out of their comfort zone into remotest Cornwall. As I said, not everyone's cup of tea. There's a great deal of silliness in this one, but if you are looking for something light to read then you could do a great deal worse than read the Fethering series in order. #8 in the Fethering Series.