Glorious day here for the last day of autumn- I know, for most of you nearly the beginning of summer. I've already seen posts from the northern hemisphere crowing about the beginning of summer holidays. Here it is the season of heaters, electric blankets, warming soups, short days, and supposedly rain, although we are not doing all that well in that department as usual.

I've been thinking this week about how I keep up-to-date with news about the crime fiction world that I'm interested in. I spend a lot of time keeping the unread bits under control with constant daily doses.
I have "news" coming in from so many quarters like the Yahoo groups that I belong to:
and I try to add to the noise there too, by contributing as well.
I also belong to a number of "projects" like this Sunday Salon one.
And then there are the RSS feeds from about 100 blogs which I monitor via RSS Reader, and share with you on Crime Fiction Journeys.
Recently I joined Twitter and now follow 134 people. I've begun to get a bit selective there though, and I've removed fopm my list a few people who seem to have a lot of conversations that don't really relate to reading.
And finally there's the Friendfeed room: Crime and Mystery Fiction where some "real" conversations occur with a smaller number of people.

All of that takes some keeping up with and a day or two away from my computer can engender a real feeling of crisis.

I use all of these sources to find out what I could/should be reading, who has been listed for what award and so on. 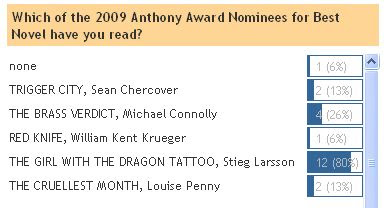 15 people participated and for a while I thought THE GIRL WITH THE DRAGON TATTOO was going to be the only one people would pick. The poll result does point out the problem with many awards, that very rarely are all those on the short list universally well known.
I should have asked if anyone had read them all - but no-one commented that they had.

This week's poll: How many writer/reader conventions will you attend this year?
Do pop over, vote, and leave a comment on why you voted as you did. Tell us where you will found.

Isn't it a pity when some people have nothing better to do than spam your comments? Blogger won's let me delete comments by Sexy at present so I am trying to force them out of my recent comments block

Thankyou for visiting my blog, I have sent a comment to the Agatha Christie Carnival.

I haven't read any of them (I didn't take the poll--missed it!)