A collection of 17 short stories, some of which were shortlisted in 1996 for the Agatha award for short stories. ISBN: 0671896326
There are a variety of readers.

Edited by: Phyllis A. Whitney and Martin H. Greenberg

I downloaded this collection from audible.com and began listening at a bit of a disadvantage, when the copy I transferred to my iPod Nano refused to begin playing with the first story. In fact it began playing about 80 minutes in, so I was anchored to my computer for the first stories. This had the additional impact of me being uncertain that I had listened to them all.

The first couple of stories at least are a bit longer than short (or at least my definition of short). 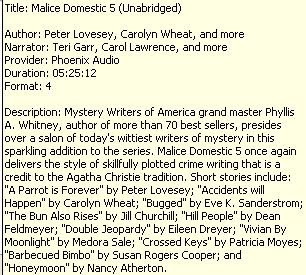 I found it difficult to know which story I was listening to. The collection could have been put together a bit better, with better spacing between the stories. Each story is read by a different narrator, and the title of the story, and the name of the author, is often read rather quickly just as you are getting used to a new voice. Some of the readers were better than others, and there was a wide disparity in reading styles. Nevertheless it is an enjoyable collection.

Listen to an excerpt from the first story.