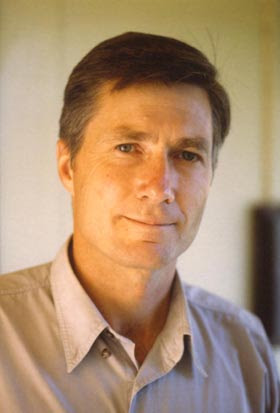 But THE MAN WHO PLAYED SPOONS (1987) was an anthology of short stories and reflects a period of Disher's writing life when he wrote stories and also wrote for younger readers.

He began crime fiction seriously in 1991 with his Wyatt series.

I haven't managed to find a cover image for THE MAN WHO PLAYED WITH SPOONS but have found this information (written by Disher himself). It was essentially an anthology of community writing:

After years of teaching, I was aware that there is a lot of vital, interesting writing going on in the community that no-one ever sees. I knew for example that in prisons, in rural areas, amongst women's groups, amongst ethnic groups, the TAFE Colleges and Adult Education classes, a lot of very good writing is being produced. Often it's the kind of material that the newspapers or little magazines don't want to publish. But I convinced Penguin it was a good idea. I advertised for writing groups all around Australia to send me manuscripts - I wasn't interested in so-called professional writers at all, but in new writers, members of writing groups and so on. I got 1,400 manuscripts from all over Australia, although in fact about 60% of them came from Western Australia. I chose forty out of the 1,400.
It's a book I'm proud of. I think it reveals that a lot of people write, that a lot of people write good material and have interesting stories to tell. A lot of those pieces were parts of memoirs, for instance of the migrant experience, the Aboriginal experience of growing up in the bush, memoirs of parent's cross-cultural experiences - as well as fiction.

My mini-review of CHAIN OF EVIDENCE (2007) which I gave 4.7 to
#4 in the Hal Challis and Ellen Destry series. Hal Challis has returned to South Australia – his father is dying- leaving D. S. Ellen Destry in charge of both his house and Mornington Peninsular East’s Crime Investigation Unit. And suddenly now in Waterloo a 10 year old girl is missing, feared abducted. Katie Blasko went missing after school but her parents did not realize it until the next morning. Filling Challis’ shoes is not going to be easy – Destry’s colleagues expect her to fail. But Ellen is in constant contact with Hal, both her friend and her mentor. At Mawson’s Bluff in South Australia, Challis is not only helping to look after his father, but trying to find out what has happened to his missing brother-in-law. A satisfying read.

You may be interested in looking for BLOOD MOON (2009), the sequel to CHAIN OF EVIDENCE

A chaplain at an exclusive private school is attacked and left for dead during Schoolies Week on the Mornington Peninsula, at a time when police resources are stretched to the limit. Hal Challis and Ellen Destry dig into his life and find links to a white-supremacist group and an egomaniacal politician on an upward trajectory.
But are these really the reasons he was targeted? As investigations continue, a resourceful and vengeful local woman plots an attack on the young man who raped her the previous summer and an obsessive architect stalks his council-worker wife. The ways in which these seemingly unconnected events intertwine are the basis for this sterling police drama from one of Australia’s most acclaimed authors.

I read "Blood Moon," a few weeks ago and enjoyed it, a nice, tidy police procedural, but with more filled-out characters and an interesting plot than many, and no gore or gratuitous violence.

Lent it to a friend (a benefit of real books) and she likes it. And I'll be reading more in the Challis/Destry series.