Review: A DUTY TO THE DEAD, Charles Todd 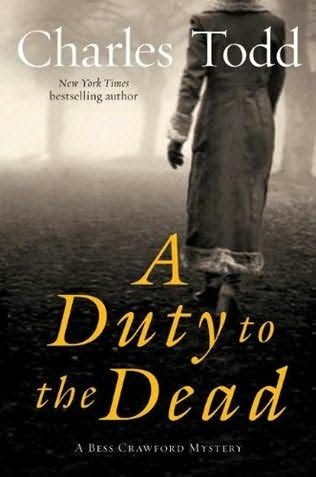 Publisher's Blurb
England, 1916. Independent-minded Bess Crawford's upbringing is far different from that of the usual upper-middle-class British gentlewoman. Growing up in India, she learned the importance of responsibility, honor, and duty from her officer father. At the outbreak of World War I, she followed in his footsteps and volunteered for the nursing corps, serving from the battlefields of France to the doomed hospital ship Britannic.

On one voyage, Bess grows fond of the young, gravely wounded Lieutenant Arthur Graham. Something rests heavily on his conscience, and to give him a little peace as he dies, she promises to deliver a message to his brother. It is some months before she can carry out this duty, and when she's next in England, she herself is recovering from a wound.

When Bess arrives at the Graham house in Kent, Jonathan Graham listens to his brother's last wishes with surprising indifference. Neither his mother nor his brother Timothy seems to think it has any significance. Unsettled by this, Bess is about to take her leave when sudden tragedy envelops her. She quickly discovers that fulfilling this duty to the dead has thrust her into a maelstrom of intrigue and murder that will endanger her own life and test her courage as not even war has.

My take:
This is the first of Todd's Bess Crawford novels,  and I found it very readable. While the well-established, still continuing, Ian Rutledge series is set after World War One, the Bess Crawford novels are set in the war itself.  A second novel in the series, IMPARTIAL WITNESS, was published in 2010.
The authors are without doubt drawing on a comprehensive knowledge of the impact of World War One on British soldiers in particular in both series.

A DUTY TO THE DEAD has a cosy feel about it, but at the same time it reminded me in style of novels I read back in the 70s by Victoria Holt and Susan Howatch.
Some readers may feel that the setting, the time frame, and the female sleuth are improbable, but it is a scenario that Jacqueline Winspear has explored in the Maisie Dobbs series, admittedly setting her first novel just over a decade later.

I certainly liked A DUTY TO THE DEAD well enough to look for the next in the series.

Other Charles Todd reviews on this blog:
[These are all Inspector Rutledge titles]
SEARCH THE DARK
A PALE HORSE
A TEST OF WILLS

Kerrie - Thanks for this review. I like historical mysteries, so even if there is a little improbability about this one, I'll probably give it a go.

Merry Christmas, Kerrie, and thank you very much for your gorgeous Christmas card!