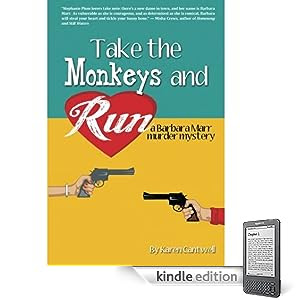 
Film lover Barbara Marr is a typical suburban mom living the typical suburban life in her sleepy little town of Rustic Woods, Virginia. Typical, that is until she sets out to find the missing link between a bizarre monkey sighting in her yard and the bone chilling middle-of-the-night fright fest at the strangely vacant house next door. When Barb talks her two friends into some seemingly innocent Charlie’s Angels-like sleuthing, they stumble upon way more than they bargained for and uncover a piece of neighborhood history that certain people would kill to keep on the cutting room floor.

Enter sexy PI Colt Baron, Barb’s ex-boyfriend who would love to be cast as new leading man, filling the role just vacated by her recently estranged husband, Howard. When Colt flies in from out of town to help Barb, events careen out of control and suddenly this mini-van driving mother of three becomes a major player in a treacherous and potentially deadly FBI undercover operation. It’s up to her now. With little time to spare, she and she alone, must summon the inner strength necessary to become a true action heroine and save the lives of those she loves. The question is can she get them out alive before the credits roll?

I can't count the number of times that I felt like abandoning this book. For me there were just too many characters, even a neighbour of 25 years, who could not be taken at face value. By that I mean they were not who they were originally presented as. And you know the concept of painting yourself into a corner? Well, this author did that several times, and the solution was yet another plot change, another rabbit plucked out of the hat. The result is a plot that leaks like a sieve.

It may simply be that I was meant to find the plot much more comic than I did. I really have a limited sense of humour and comic crime fiction rarely cuts it for me. That I am among a minority of Amazon readers is patently obvious from the average rating of 4 and a bit stars given by 42 reviewers. So TAKE THE MONKEYS AND RUN, a semi-finalist in the 2009 Amazon Breakthrough Novel Award contest, may well be your cup of tea. It just wasn't mine.

Oh dear. Sorry you had such a bad experience - I quite like comic stuff but I have to say that nothing you've said and nothing any of those other reviewers who are more positive have said makes me think this is my cup of tea either