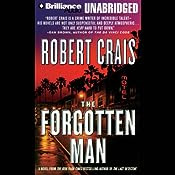 AUDIOBOOK
The Forgotten Man: An Elvis Cole Novel
print version published 2005
UNABRIDGED
Publisher's summary
Los Angeles, 3:58 a.m.: Elvis Cole receives the phone call he's been waiting for since childhood. Responding to a gunshot, the LAPD has found an injured man in an alleyway. He has told the officer on the scene that he is looking for his son, Elvis Cole. Minutes later, the man is dead.
Haunted throughout his life by a lack of knowledge about his father, Elvis turns to the one person who can help him navigate the minefield of his past - his longtime partner and confidant, Joe Pike. Together with hard-edged LAPD detective, Carol Starkey, they launch a feverish search for the dead man's identity - even as Elvis struggles between wanting to believe he's found his father at last, and allowing his suspicions to hold him back. With each long-buried clue they unearth, a frightening picture begins to emerge about who the dead man might have been, and the terrible secret he's been guarding.
At the same time, Elvis has no way of knowing he has awakened a sleeping monster. The further he goes in his investigation, the closer he draws to a merciless killer who is violently connected to the unidentified man's past. This psychopath believes Cole is hunting him, and he goes on the attack to find Elvis before Elvis can find him.

THE FORGOTTEN MAN begins with  a horrifying glimpse into a house where a triple homicide has taken place. It is only later that we work out what relevance this has to the main story.

This is a gripping story, made more poignant by the fact that Elvis Cole has been searching for his father all of his life. But the more Elvis, the "world's greatest detective", investigates the dead man in the alley, the more he is convinced they are not related. Why then did Herbert Faustina say he was, and why did he have a heap of press cuttings about Elvis Cole?

The listener is helped in tracking the multiple points of view from which this story is written by the narrator identifying the character at the beginning of each chapter, if a narrative point of view change has taken place. It doesn't seem that this was used in the original printed version.

This is #10 in the 13 title Elvis Cole/Joe Pike series. It was nominated for a Shamus Award.

Kerrie - Thanks for this review. I'm glad you liked this one; I happen to like Elvis Cole :-). It's interesting, isn't it, how audios can really add to a story, especially if it's a question of point of view. Sometimes point of view is actually clearer in an audio version.

Fine look at this Robert Crais classic. In many ways, I find it the most touching of his novels. It also makes for a splendid close to what many consider is the informal trilogy begun with L.A. REQUIEM and bridged so well by THE LAST DETECTIVE. Narrator Daniels does his usually best with this. Although, I also admire William Roberts work done on this series in the U.K. for the BBC Chivers audiobook line. Well done. Thanks for this.