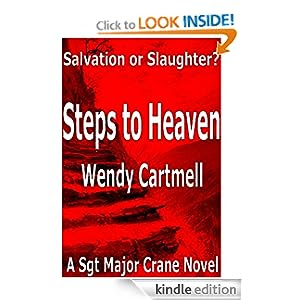 Sergeant Major Crane, a Special Investigations Branch Investigator, in the Armed Forces, is a proud, dedicated and experienced soldier, constrained by the Army structure, but adept at manipulating the system.  He and his young team of Staff Sergeant Billy Williams and Sergeant Kim Weston, based at Aldershot Garrison, have to investigate one of the most horrific cases they have ever taken on.  A soldier who has deliberately murdered his wife and 6 year old son and then committed suicide.

Crane wants to know what is behind this horrific act, but has to battle against cynical opposition from his Officer Commanding, Captain James Edwards who makes him investigate a different crime.  But Crane is vindicated when a second copy cat murder suicide by a soldier in Colchester is followed by a third in Catterick.  Paralleling these investigations, Crane's wife Tina wants a decision on whether they should start a family.  A decision Crane is unable to make, haunted as he is by the deaths of three young boys.

[there was more on the Amazon page, but I felt it gave too much away]

The reader is quickly introduced to the case that will be central to this book. A prologue gives us a birds-eye view of the events immediately before the first murder/suicide so that we have an inkling of what Sergeant Major Tom Crane from the Armed Forces Special Investigations Branch at Aldershot Garrison will see when he arrives on the crime scene.

Just as the reader know things about this incident and similar ones that occur later, because we are there, that Tom Crane doesn't know, so there are occasionally events that Tom Crane takes part in that he only relates to us, even though for the most part we are right at his shoulder. We piece together the evidence just as he does, although there are a couple of surprises at the end.

STEPS TO HEAVEN raises interesting questions about the mental vulnerability of soldiers who have returned from tough conditions in Afghanistan and are expected to just pick up "normal" life. We are given insights of what life is like on the army bases for them and their families.

The author has chosen to write this e-novel entirely in the present tense and it took me time to get used to that. While this does give the action a sense of immediacy it does cause its own problems with establishing chronology. For example the events actually take place over a period of August to November, but I didn't really get that sense of the passage of time. There's a rather complex relationship between the dates too that left me a bit cold.

STEPS TO HEAVEN is a self-published e-book, the debut title in a series that already has a second title. In some ways it is a classic police procedural in a modern setting, although set in the British Army rather than the police force. I liked Tom Crane's focus on why, what has led these soldiers to these abnormal acts. The author also establishes a personal background for us about Tom Crane which gives room for later development.

This was a nice solid relatively quick read and I'll certainly read the next, 40 DAYS 40 NIGHTS set in the leadup to the 2012 Olympics.

About the author
Wendy Cartmell is a former teacher, PR Manager and Editor of a large corporate Newspaper, who has always written either for her work or stories for her children. She turned her hand to crime writing in 2010 resulting in a new crime series featuring Sgt Major Crane of the Special Investigations Branch, drawing on her husband's 22 years service in the British Army.

in some ways it sounds a little like Prime Cut by Alan Carter (which I read thanks to your and Bernadette's reviews), at least in the opening. I don't like reading the present tense either, and it seems to be becoming more popular in novels. Maybe reviewers could devise a special logo to denote the fact in their reviews!

I hadn't thought of that similarity Maxine, but you are right. What interested me was the army setting.

I also like the way it is set in the immediate present, linked to returnees from the Afghanistan war