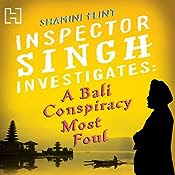 Inspector Singh is back, but this time on secondment to Bali. A bomb has exploded and Singh has been sent to help with anti-terrorism efforts. But there's a slight problem: he knows squat about hunting terrorists. He's much better suited to solving murder!

So when a body is discovered in the wreckage, killed by a bullet before the bomb went off, Singh should be the one to find the answers - especially with the help of a wily Australian copper by his side. But simple murders are never as simple as they seem - and this one has far-reaching global consequences ...

This book is of special interest to Australians because it is based around the Bali bombings of October 2002 when 202 people, (including 88 Australians, and 38 Indonesian citizens) were killed when 3 bombs were detonated, two at Kuta and one in Denpasar.

The irony of the story is that while the police are hunting down those responsible for mass murder, Inspector Singh and Bronwyn Taylor, an Australian Federal Policewoman, are deployed to hunt down someone who used the bombing to cover up a homicide. No-one expects Singh and his offsider to succeed for both are held in pretty low regard by their colleagues.

The plot is a clever mix of fact and fiction, with some of the characters' names resembling those eventually convicted of the bombings. The author does a good job of describing why the bombings happened, how ordinary people were caught up in them: the bombers themselves, the ex-pat community, the Balinese economy and people. I liked the fleshing out of Inspector Singh much better than in #1 in the series. Bronwyn Taylor, the Australian policewoman, comes over well as both compassionate and conscientious, and she and Singh make a good team.

I thought too that the author captured the flavour of Bali very well, although I have to admit it is 35 years since I was there. Time for another holiday I reckon.

Narrator Jonathan Keeble does a good job with a range of accents including some dreadfully flat Australian ones.

See my review of INSPECTOR SINGH INVESTIGATES, A Most Peculiar Malaysian Murder

Shamini Flint is an established writer of children's books, living in Singapore, and has a background in international law. Her website makes interesting reading

Nice review. In some ways the "bombing covering up a homicide" plot reminds me a bit of The Cold Cold Ground by Adrian McKinty, when in 1980s Ireland the murder case was apparently a sectarian killing - or was it just disguised as one? (That's the central question in the book, the answer would be a spoiler).

Kerrie - Thanks for the fine review. I like it when a book can mix both historical fact and fiction in an effective way. And it sounds as though the audio aspect of the story worked for you. That's terrific as it doesn't always.

I enjoy Inspector Singh mysteries, thanks for a great review.