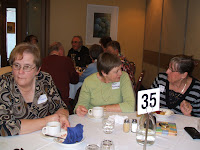 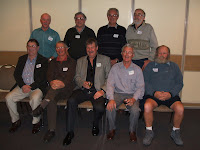 Today I went out to lunch with a number of people whom I began secondary school with 50 years ago last February. It's interesting to see how little we've all changed once you peel back the years. Of course many of us look like our parents! Many of the others still live in the country town where we went to school, and quite a number of them are retired. Some are grandparents, even great-grandparents. Mostly our parents are still alive, although they are in their late 80s and early 90s. 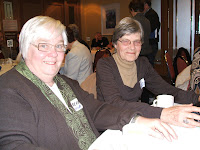 I was in a girls class in that first year and our teacher (on my left) came today too.
She seemed so old back in 1958, but in fact she was only 19 and we were her first class.

We had our first reunion about 4 years ago just as many of the class were about to turn 60. Interesting that such a little school, never more than 350 students, could have had such influence.

We were true Baby Boomers, born in the year after the war in the Pacific finished. 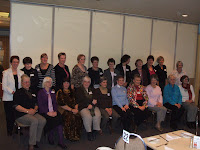 Many of our year became teachers, some doctors, an architect, a professor of mathematics, some farmers, nurses, midwifery sisters, artists, a scientist or two, a florist, a graphic designer, a music teacher and composer, - the whole gamut of occupations really. 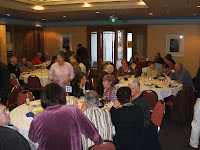 Life was very different then. Australia was suffering post-war effects, rationing still in force while we were young, paperbacks non-existent, Australia pre-decimal currency, school leaving age set at 14 years, very few before us completed secondary school, and in fact I had to go to the city, leaving home at 16 years, to complete the final year of secondary school.
The lunch passed quickly, lots of swapping of memories, catching up with what has happened in 50 years, sharing of brag books, looking at class photos 50 years old,. Many thanks to Julia, the 2 Helens and Vic for organising us - not an easy task.

Its a healthy thing to take the time to recall and reflect on our past-----remembering the way we were so to speak----and comparing it with the here and now----keeps a person "grounded", and keeps us from going off the deep end.

Kerrie, sorry I could not be there. I am in Singapore until end of August and then will retire to Newcastle. I hope to make it to Victor and Adelaide later this year and will chase down a few of you at that time. Cheers Tim Roberts