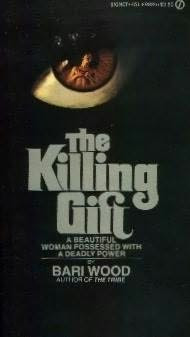 This book took my eye as I scanned my records. I apparently read it late in 1977 and it is truly a "forgotten book". - I can't remember anything about it. So what you read here is the result of my research. Perhaps you remember the author or the book?

The following blurb is courtesy of Fantastic Fiction.
The man who broke into the Gilberts' apartment died brutally. His spine was snapped like a drinking straw. . . . but no one had touched him. For Stavitsky of the homicide squad a highly unusual murder investigation becomes an obsession. Twice before Jennifer Gilbert had been near to people who died horribly and inexplicably. Has she The Killing Gift?

One of the Amazon reviews of THE KILLING GIFT says it was a Putnam Award novel (I'm not sure what that means exactly). Another says "Scary, suspenseful, tragic - I've read this book so many times I've worn out my copy and need a new one! Definitely recommend."
There's another, more revealing Amazon review available which makes it sound a tantalising read.
The most recent printing of THE KILLING GIFT was apparently a paperback in 1988. Used copies are available from $0.01 plus postage!

Fantastic Fiction lists Bari Wood as the author or co-author of 8 books over a period of 20 years:
However according to Wikipedia TWINS and DEAD RINGERS are the same book. In 1988 DEAD RINGERS was made the basis of a film: Dead Ringers is a 1988 psychological horror film starring Jeremy Irons in a dual role as identical twin gynecologists.

DOLL'S EYES became the film IN DREAMS in 1999: In Dreams is a psychological thriller directed by Neil Jordan, released in 1999. The film has a running time of 1 hour and 40 minutes.In Dreams has the distinction of being the last film Robert Downey, Jr. completed before being sent to Corcoran State Prison on drug charges.

Bari Wood was an American author born in 1936.

Trivia about Dead Ringers:
David Cronenberg ("The Fly"/"Videodrome"/"Shivers") bases this intense psychological medical drama on a true story about identical twin gynecologists Stewart L. Marcus and Cyril C. Marcus, whose decayed bodies were found in their posh East 63rd Street pad. Stewart apparently died several days before Cyril, and the cause of death was blamed on a barbiturate withdrawal. Bari Wood and Jack Geasland based their 1977 fictional novel, Twins, on that bizarre incident. Cronenberg and Norman Snider, the cowriters, take so many liberties until it completely meets the director's usual themes of existential horror, the battle of the sexes, the macabre contraptions used in medical treatment, the arrogance of the medical profession and falls into line as a classic study of mortality. The director almost entirely invents his own pathological take on that fact-based story. Jeremy Irons superbly acts as both Beverly Mantle and Elliott Mantle, the names of the scientifically gifted identical twin gynecologists who sub for the real doctors. In the ten or so shots when the twins were on the screen together, Cronenberg used a stand-in played by John Bayliss. Irons' performance earned him the Best Actor award by the New York Film Critics Circle.

You've been given an award. Please check in here to pick it up!

Thanks for another excellent review. I'm going to take next week off. See you on January 2nd. Have a great holiday.

This does sound like a book I'd enjoy. Thanks for bringing it up.

Thanks for dropping in Terrie. I'm just sad I wasn't able to find out more about the author