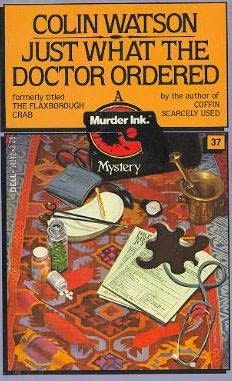 Colin Watson (1920-1982) was a British writer of detective fiction and the creator of characters such as Inspector Purbright and Lucilla Teatime. He is most famous for the twelve 'Flaxborough' novels, typified by their comic and dry wit and set in a fictional small town in England.

I have been a Johnny-come-lately to this series and read THE FLAXBOROUGH (1969) only a couple of years ago.

The village of Flaxborough appears to have a sex fiend who attempts to molest women of varying ages as they walk along the riverside or through the woods. Others have reported their underwear has gone missing from laundry lines. So far descriptions of the man vary from tall to short, thin to solid, semi-bald to a full head of hair, but what they all seem to have in common is a scrabbling crab-like gait as the offender makes his escape.
As Detective Inspector Purbright of the Fen St. police station investigates an incident in which the town’s assistant librarian successfully thwarts an attacker, he uncovers other incidents thus far unreported.
The action hots up when Alderman Winge is drowned on an excursion to a local reservoir with the Darby and Joan club, and the name of one of the local doctors appears to be cropping up more than it should.

The Flaxborough novels are a dozen or so cozies in the Golden Age village mystery tradition, but very much in a tongue-in-cheek with a puckish sense of humour. If this one is anything to go by, they are carefully crafted relatively quick reads.

Oh this takes me back. Thanks so much.

I keep thinking I must find some more. They are quick reads

This series sounds good. Sometimes I just feel in the mood for a cozy, and I like the tongue-in-cheek aspect.

Watson was a marvellously entertaining writer. I haven't read this book, but several others in the series that I have read are terrific.

Who did the artwork on that top one? I've been working on trying to call out cozy cover artists more--but the first step in that is finding out who they are...and I'm finding it surprisingly difficult to do. Most times, it seems they aren't mentioned (unlike in sci/fi/fantasy for example.)

So if you happen to know, I'd be interested in finding out!

Belle, you would probably enjoy them.

Martin, I only discovered these through a friend 2 or 3 years back. I don't know why they never cropped up for me earlier. Probably just didn't penetrate the Australian market much.

You are right Maria - crime fiction covers seem to focus on the author not the cover artists. This one is just "borrowed" from Fantastic Fiction