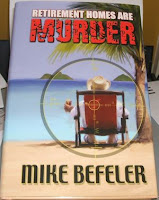 Waking up every morning with a clean slate may appeal to some but for Paul Jacobsen it is "crapola". Every time he sleeps Paul Jacobsen's short term memory re-sets itself, so it is a real incentive not to nap during the day. While he is awake he has a photographic memory of what has happened since he last slept. And he's been living with this for 5 years!

Paul's son Denny has helped him to move into a retirement home on Big Island, Hawaii, and he wakes the next morning with no memory of how he got there or where important things like the dining room are. That morning he discovers the body in the laundry chute.

Mike Befeler's debut novel is humorous, quirky, and a bit of a romp in more ways than one. Mike himself, whom we met earlier this year at Left Coast Crime

, refers to it as "geezer lit" - hence the cap in the image to the right.

RETIREMENT HOMES ARE MURDER is simultaneously a murder mystery with the usual red herrings, and a realistic exploration of the problems that be-set the elderly with advancing age.

Blurb from Mike Befeler's website:
Remembering nothing from the day before, crotchety octogenarian Paul Jacobson must become an amateur sleuth to clear himself as a murder suspect when he finds a dead body in the trash chute of a retirement home. As Paul’s snooping and short-term memory loss get him in trouble with the local police, his new friends and granddaughter Jennifer help him solve an expanding list of crimes. Paul finds romance as he struggles to escape a murderer intent on a repeat performance.

Mike Befeler now has a sequel in print:
LIVING WITH YOUR KIDS IS MURDER.
Blurb from Mike's site:
Imagine waking up in your son’s home, not remembering anything from the day before and being accused of murder. Or consider a male Miss Marple enmeshed in a light-hearted Memento with a dash of Fifty First Dates. In this, the second of the Paul Jacobson Geezer-lit Mystery series, crotchety octogenarian Paul Jacobson must solve two murders while struggling with the problems of his short-term memory loss. As Paul ends up suspiciously close to a bank robbery, kidnapping and drug bust, his granddaughter Jennifer helps him track down the real perpetrators. Paul juggles two girlfriends, experiences the vagaries of romance and must find a way to stay alive when he confronts the murderer.

Certainly a book I'd like to get my hands on.

Loved the review! I just checked Paperback Swap. A copy was available, so I placed my request. Thanks!

Nice review. I loved Retirement Homes are Murder and can't wait to get my copy of Mike's newest Paul Jacobson mystery. Since I live just up the road a piece (in Colorado that's about 25 miles), I'm hoping to catch him at a signing in the near future.

Goes right along with the story I just published on Pulp Pusher. We must all be thinking along the same lines.

That first one sounds really appealing :)

love the review. can't wait to get my hands on a copy now.

I read Retirement Homes are Murder when it first came out. Liked it too!

I love this title - and it gives you a good idea that it's going to be a fun read.