When listening gets complicated

This week I've begun listening to LUCIFER'S SHADOW by David Hewson.
And 40 minutes in, I'm finding it hard to work out what is going on!
The reason? The narrator keeps reading with Italian accent overtones.
I'm finding it difficult to distinguish characters from each other, and when he lapses occasionally into "real" English, my relief is enormous.
There are at least two time periods, and even there I'm having trouble working out whose point of view I am hearing things from.
I hope it gets better, I have nearly 16 hours of listening to do!

Have you ever been put off listening to a book by a similar problem.

If you'd like to read the opening chapter of LUCIFER'S SHADOW then click on the cover image. 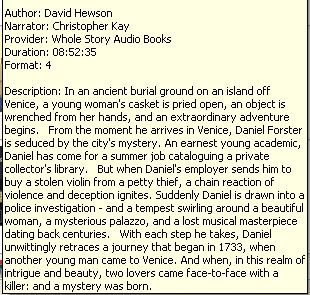 In this Venetian thriller, British author Hewson (A Season for the Dead) offers a tantalizing tale of intrigue, murder and sex. Two props propel the action: a concerto penned by a young Jewish woman in 1733 and performed once, anonymously, before its disappearance, and her unique violin. When in the present day this instrument is snatched from an obscure grave and the anonymous concerto is discovered in a long-forgotten hiding place, an innocent English scholar is drawn into an increasingly dangerous game of deception. Through the 18th-century letters and journals of a printer’s apprentice, the reader discovers the secret of the concerto, while Daniel Forster, in Venice to work for an ailing art collector, relives the mystery connected to the beautiful piece of music. The story set during the glory days of Vivaldi is more vivid, compelling and romantic than the contemporary one, as Daniel’s a bit of a cold fish. And if the various elements don’t quite add up to a satisfying whole, the intricate view of Venice with its palazzos and sewers, its concert halls and old Jewish ghetto is more than ample compensation.

I had a bad experience with this author as he does not like negative reviews. Who does?
I await your rating of this audibook with interest. Of course I may have just read a one off poor book although there are other amazon reviews that agreed with me.

I haven't had this problem with an audiobook yet Kerrie. But funnily enough I am reading my first David Hewson in print (season of the dead) and I have to say it's hard going in the more traditional medium too. I'm up to about page 80 and thoroughly uncaptivated by either the story or the characters. There's been a lot of gore and a few hints at dark undertones but really it's like a poor man's Dan Brown book so far.

I read 3 Hewson titles about 3 years ago and gave the following ratings:
A Season for the Dead 4.2
The Sacred Cut 4.8
The Lizard's Bite 4.6
so I was expecting that this one would be somewhere in there. But it is the narrator's use of what he thinks is authentic Italian accenting that is getting to me.
He isn't making a clean difference in characters to my ears and that is most bothersome.