Where do you "live" online?
I have a pretty active online life, in Yahoo groups (oz_mystery_readers in particular), in Twitter (smiksa), on this blog, in Friend Feed (Crime and mystery fiction), and I monitor lots of fellow crime fiction bloggers (Crime Fiction Journeys)
It is interesting to see the same "faces" crop up in different places. You do develop a coterie of cyber friends don't you?.
In Twitter I've been thinking about joining a "twibe"- not sure that I need one, or if I will create one just for crime fiction readers/bloggers.

Fair Dinkum Reviews is a collective blog being added to by a group of Australian book reviewers including me. We will mainly be including crime fiction but not exclusively. If you want to monitor inclusions either by RSS feed or by becoming a "follower". 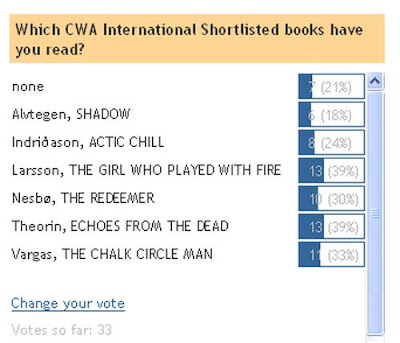 You might remember that this poll has been running for two weeks, but in fact only 6 of the votes were recorded in the second week.
Some things surprised me:
Even though my poll has now closed, EuroCrime will continue to collect votes on two topics: Which title do you *want* to win the International Dagger? and Which title will win the International Dagger? So make sure you pop over there and register your opinion.

Additions/changes to my blog

I've added a Google Translate widget that allows readers to choose a language to read my blog in. I don't read any other language so I am not sure how accurate the translations are, but have had some feedback that it works well enough with Greek and Dutch. If you are proficient in a language other than English, then you might like to test it out for me and let me know - you'll have to write your comment in English though. Do you find tools like this useful?

We don't read the same genres, still I like coming by. I'm impressed each time with how organized and involved you are.

To answer about social circles, prior to blogging I participated very actively on discussion forums. Years ago I belonged to listserves. I recently joined Twitter. I'm a novice in every way there. I'm on Facebook primarily to promote my community group. Not fond of the format there.

Looking organised is an illusion really, although I do try to blog everyday, and I have fallen into a bit of a pattern with what I do with Sunday Salon. Thanks for dropping by Susan.

Are the six nominees difficult to buy in Australia? I just wondered because so many replies were from people who had not read any of the books.

Kerrie - Interesting post. I do not have enough time to keep up with my blog and my reading, let alone my twitter, goodreads and facebook accounts. I don't tweet over my phone, just on my computer, mostly I read the tweets from people I follow. I thought it was silly until the Iranian election stuff started coming through.

I find have to disconnect from some things so I can devote more time to other things!

I would be interested in a "twibe", because the word "twibe" is such a kick! Have a great week.

Its definitely readable when I translate into Danish, albeit a little goobledygook at places, but from the context, you can esily figure out what the translator means ;o)

I will prefer to continue to read your blog in English, though.

Norman, about 20% of my readers come from Australia, so I would expect the same %age applies to the poll. The books are all readily available here

Time to do everything is a real problem isn't it Gavin? I think Twitter will grow in strength and as a communication app.

Gald to hear that Louise. an automatic translator can never handle language nuances but I'm glad to hear it may be of some use.

I only network on blogs. Otherwise no, not much..

BTW, lately I have been reading a lot of Crime/Mystery fiction.