It is the Queen's Birthday weekend here in South Australia, in fact most of Australia.
Well, it is not Queen Elizabeth's birthday - she had her 83rd birthday on April 21
According to Wikipedia it is the Anniversary of her Coronation on June 2nd 1952, celebrated on the 1st, 2nd or 3rd Monday of June. A sort of moveable feast. Even in Australia we don't all celebrate it on the same weekend.

I always thought it was Queen Victoria's birthday (that's her above), but have found out this morning that hers was on 24 May, so that doesn't work either.
It appears that it may have its origins in Australia in King George's birthday, good old mad "Farmer George", who lost the American colonies by his obstinacy. Governor Arthur Phillip, the first governor of New South Wales, showed his loyalty by declaring a holiday on June 4, 1788.

Anyway, whoever's birthday we are celebrating, it is nice to have Monday off.

Breaking News
What I am reading
I amy have to alter this list, as I think I need to read the remaining 3 nominations for the CWA international award. 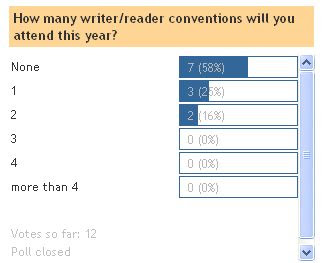 As you can see, it didn't attract many responses.
It appears that a couple of us may meet up at Melbourne Writer's Festival though.

I hope the poll that I am running in relation to the CWA International Dagger Awards shortlist will be more attractive.

I'm asking how many of the shortlist you have currently read. It would be wonderful if you could comment on your poll choice.

I will run a poll closer to the date to see which book the readers of this blog think will win. As I've said in my post, it will be a tough call. All the contenders look really strong.

Happy Sunday! Enjoy your Monday off.

I haven't read any of the books on the shortlist.

I've read only 2 of the nominated books although I have read at least one book by all the other authors with a book up for nomination. I doubt I'll read the rest of them before the awards though as I have so much else waiting to read,