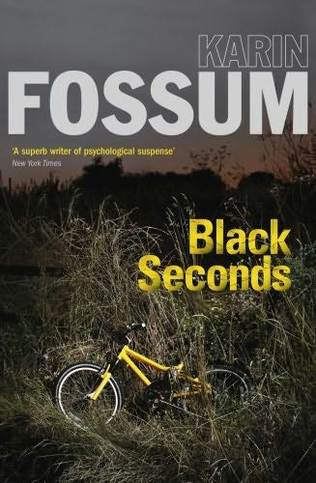 This review is one of a number that I am re-publishing as they were originally published elsewhere, not on this blog.

Helga Joner has often thought that her nine year old daughter Ida is too good to be true, too good to last. The disappearance of a child is every parent's worst nightmare. When Ida fails to arrive home from the shop, Helga feels she had been rehearsing the moment for years. First Helga and her sister Ruth scour the streets where they might find Ida, without success, and then they ring the police. Helga feels that somehow she has tempted fate, setting off an inevitable chain of events.

When Inspector Konrad Sejer arrives at her house, Helga feels instinctively that he will find Ida. As time passes Sejer becomes concerned that no trace has been found of Ida or the bright yellow bicycle she rode to the shop. One hundred and fifty volunteers search for Ida without success. Eight days later there are still no clues, the search is to be scaled down, and a chance comment by Helga to Sejer gives them something new to work on.

The careful reader will pick up the clues laid by Fossum early in the book, and probably feel at the book's end that he/she has always known where it was headed. But that won't diminish your enjoyment of this novel. The path is rich with scenes, characters, and explorations of how people think, and why they make the choices they do. Even so, nothing is certain, the characters are as large as life, and the scenarios so believable.

This is the fifth title in author Karin Fossum's Inspector Sejer series. What a pity it has taken five years for an English translation of this masterpiece by the Norwegian "Queen of Crime" to become available. If you've never read anything by Karin Fossum, after BLACK SECONDS you'll want to start the series at beginning, enjoying the connections between her novels, the plots she creates, and the development of the character of Konrad Sejer. Let's hope the next two novels in the series, already published in Norwegian, become more quickly available.

Karin Fossum lives in Oslo, and, in her early fifties, is a relatively young writer. Her successful Inspector Konrad Sejer series has been translated into over 16 languages. She won the Nordic Glass Key award in 1997 for DON'T LOOK BACK, and in 2005 CALLING OUT FOR YOU was shortlisted for a CWA Gold Dagger.

Other links on my blog
Other mini-reviews:

DON'T LOOK BACK
The second time I have read this book by the 'Norwegian Queen of Crime' and I liked it even better the second time around. A six-year-old child disappears, terrifying her parents; when she suddenly returns home, a teenager is found murdered on a mountain path, her naked body carefully covered with a jacket. And the teenager’s on-and-off again boyfriend has lived through a childhood so nightmarish that he barely survives, only to find himself a murder suspect.There is comfort in the person of Inspector Sejer, the man charged with solving this murder in the picturesque setting near the Kollen Mountains. With his calm demeanor, the gray-haired inspector pursues anyone who knew the murdered girl, peeling away the façade of this idyllic village. The teenager’s shocking death has unsettled everyone, but there is an appalling paucity of clues for the inspector to work with on this puzzling case.
My rating: 5

HE WHO FEARS THE WOLF
is the second title and for some reason I have no record.
This is the blurb from Fantastic Fiction
Superb plotting, fresh style and compassionate, detailed treatment of characters have made the Inspector Sejer Mysteries bestsellers in their native Norway. A twelve-year-old boy runs wildly into his local police station claiming to have seen Halldis Horn's brutally murdered corpse. Errki Johrma, an escaped psychiatric patient and known town misfit, was sighted at the scene disappearing into the woods. The next morning the local bank is robbed at gunpoint. Making his escape the robber takes a hostage and flees and, once again, a suspect takes to the woods.

WHEN THE DEVIL HOLDS A CANDLE
Translated from the Norwegian and starring her detective creation, Inspector Konrad Sejer and his sidekick, Jacob Skarre, the book tells the tale of two delinquent youths who accidentally kill a child when snatching a purse from a pram. Later that day, a life-changing event occurs between the two friends, Andreas and Zipp, who – in order to erase its memory – choose to rob an elderly woman. Except that Andreas enters her house, but never leaves again. While Zipp ponders where he is and the police close the net around the baby's murderers, Fossum takes you inside the house to witness the grim goings on. She draws the reader into the mind of the old woman, explaining her actions and her perceptions of the young man she has trapped there, even as she recounts the grisly events taking place behind her closed doors. It also touches on the ongoing saga of Sejer, his newfound love for Sara and the hassles that affect his family and friends.
mY RATING 4.5

CALLING OUT FOR YOU! (aka INDIAN BRIDE)
Gunder Jomann, a quiet, middle-aged man from a peaceful Norwegian community, meets Poona on a trip to India and the two agree to marry. Gunder returns home to prepare for her arrival, but the day Poona is due to arrive, he is summoned to the hospital as his sister has been involved in a car crash. The driver sent to collect Poona in Gunder’s place fails to meet her. Then the body of an Indian woman matching Poona’s description is found in a cornfield on the edge of the community and a murder enquiry is set underway. This baffling mystery — for what motive could there be to bludgeon a newly arrived foreigner to death — sends shock waves through the community. Inspector Sejer and Skarre are called in to investigate. Increasing suspicion surrounds people’s mundane daily activities, and even when one man’s confession seems to tie up all the loose ends, there remains the uneasy feeling that all is not as simple as it first appears. published in 2001, not translated until 2005.
My rating: 5

So Don't look back is the first one in the series? I have that here...should read it. Should read lots of things.

I think there may have been a first in the series in Norwegian Bernadette that hasn't ever been translated into English. See Euro crime

I have enjoyed all her books, and I think Don´t Look Back and When the Devil Holds a Candle are the two I would rank highest. In her own quiet way she is sooo scary.

Karin is a great writer and I eagerly devour each and every one of her books. This one I felt was especially tragic and I confess to being quiet emotional on Gunder's behalf... sign of a good writer to evoke this response in the reader!