I'm cheating a little bit here - I haven't quite finished listening to this audio version of the book, but I am only minutes away, so nothing is going to change my mind.

Originally published in 1994. I downloaded this version at Audible.com

Justice is a concrete blonde - that's what Honey Chandler the prosecuting attorney tells Harry Bosch as they stand outside the courtroom smoking a cigarette. Why? She doesn't speak and she is blind. 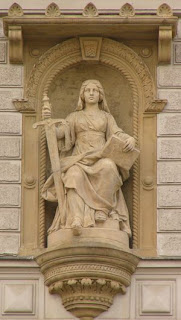 LAPD detective Harry Bosch is being prosecuted by the widow of a man he shot 4 years earlier. Harry burst into a flat and shot dead a man whom he thought was the serial killer the Dollmaker. Now Harry is in court being portrayed as the worst of the worst, a rogue cop, who believes he is judge, jury and executioner.

The day the trial starts a new body is found, embedded in a concrete floor, as the result of a tip off received by the LAPD. It has all the trade marks of being the work of the Dollmaker, but how can that be if the Dollmaker was killed by Harry 4 years before?


The dark heart does not beat alone
Much of THE CONCRETE BLONDE deals with the trial, with Harry's doubt about whether the man he killed really was the Dollmaker, and if he was, who killed the blonde in the concrete. 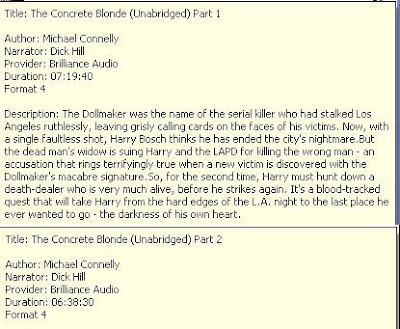 This is a tightly plotted book, excellently read. I was impressed by the variations in voice that the narrator Dick Hill was able to produce. I also enjoyed the structure of the story and the other elements that were included such as Harry's relationship with Sylvia.

THE CONCRETE BLONDE IS #3 in the Harry Bosch series.

Kerrie - Oh, I enjoyed this one, too! I agee with you that the plot is nicely paced and tight, and I think the characterization is done well, too.

This was the first ever Harry Bosch book I read, a few years ago. I'd read a couple of Connelly's standalones, like THE POET, first, but this book got me hooked on Bosch. Nice review.

I've since gone on to read a fair chunk of the series, like THE BLACK ECHO, THE CLOSERS, NINE DRAGONS, THE NARROWS, ECHO PARK, and THE OVERLOOK (which is a Bosch book, by the way).

I still haven't got around to THE BRASS VERDICT, which I hear is excellent (and it brings in Mickey Haller from THE LINCOLN LAWYER too), and I need to go back to a few of the older classes, like THE LAST COYOTE and TRUNK MUSIC etc. Just got to find the time. Always the way, eh?

In my ideal home library, I'd have a set of all Connelly's books.

I started reading Connelly's books with the excellent "The Lincoln Lawyer." It was one of the best legal thrillers I've ever read.

Then a friend loaned me "The Closers," which I could not put down, liked it and went on and read a few more Bosch books.

He is a good character and I know I'll eventually read all of these.

I do know that if I were going on a plane or train trip, that I would grab any Bosch paperbacks in the terminals to take with me.