A book review that was originally published elsewhere. 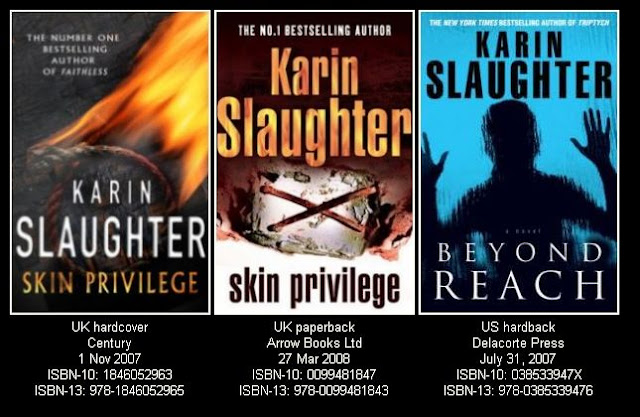 When Detective Lena Adams is arrested in Reece, her home town in Georgia, her boss, police Chief Jeffrey Tolliver, goes to help her, taking his wife medical examiner Sara Linton with him. Sara has problems of her own: she is being sued for medical misdiagnosis after the death of a young patient. The parents, overwhelmed by debt, are looking for someone to pay. Lena has returned to Reece after learning that her uncle, a reformed alcoholic, is using drugs again.

Lena has been discovered by the local police sitting on the ground on the perimeter of a high school sports field, with her foot on a fuel can. On the fifty yard touch line is a burning Cadillac and investigators can see a body charring on the back seat. When Lena won't answer questions or indeed speak at all, she is taken to the hospital, and then charged with obstructing the law. Soon after Jeffrey and Sara arrive, Lena absconds, setting off a chain of events that places them all in great danger.

This is a novel about racism, police corruption, drug addiction and alcoholism. Dealing in speed and other drugs is rife, skinheads rule, and the previous police chief in Reece resigned after his house was fire-bombed. But this is a story about people, how they behave, and what they learn about each other and themselves in extreme circumstances. Karin Slaughter is hard on her characters. Really nasty things happen to them.

One aspect of this novel that may catch the reader unawares is that many events are recounted out of sequence. I found it difficult to get the chronology straight in my mind, and that resulted in a little confusion and some surprises.

SKIN PRIVILEGE is the sixth title in Karin Slaughter's Grant County series and I felt, at times, that I should have read all of the other five, even though there is a considerable amount of "back-story" recounted. Facts half remembered from dipping into earlier titles annoyed me, and I did wonder whether this would worry the reader if this title was the first they had read. Perhaps they won't realise what they've missed, but SKIN PRIVILEGE may send them looking for more.

SKIN PRIVILEGE ends with a punch that I didn't see coming, something that fans won't want to miss.

I think your point re the back story is a very good one, Kerrie. There's enough of it and enough of a progression in the series that I, unknowingly dipping into the series with the third novel, sensed then that it might be wise to start at the beginning. It was a splendid series and unfortunate that Slaughter, as Maxine has pointed out and the author herself pretty well advertised, has taken a turn for the worse and toward the gratuitous of late. It's an odd case, very evident in her blog, of an author catering to a certain part of her readership with the certain consequence of alienating a good part of the rest.

I read two books by Karin Slaughter, the second of which I found to be full of gratuitous violence, directed against women.

It bothered me so that I have never read another book by her.

I just do not understand the extreme violence against women, including by women authors, in crime fiction. Who enjoys this? Is it a sickness? I do not get it.

So many women readers do not read these type of books or if they read something which is good, they skip the violent segments.

A good story with an interesting detective, plotline and dialogue is enough.

Is this violence a substitute for that?