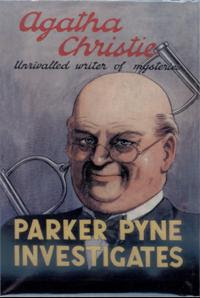 First published in 1934, the edition I read was published by Fontana/Collins in 1974. 158 pages.
The cover image to the right was the original one used on the dust jacket in 1934, and seems to me to be a good likeness of portly and avuncular Mr Parker Pyne.

This title is a collection of 12 of the 14 short stories that Agatha Christie wrote that featured Mr Parker Pyne.
The connecting thread between the stories is Mr Pyne's advertisement at the top of the Agony column of the respectable newspapers:

Mr Pyne's solution for each of the people who consults him is individual and very varied in the fees that he charges. The first 6 stories are set in England while in the last 6 stories Mr Pyne is on holidays travelling first on the Simplon Express, and then to some of Agatha Christie's favourite places in the Middle East such as Baghdad, the Nile, Shiraz and Delphi.

Many of the 12 stories had been individually published in the period 1932-4 but the overall the effect of the collection is like an episodic novel. Wikipedia gives you a lot more detail for each story than I am going to give here. You can also get some details of their publication history.

Mr. Parker Pyne states quite clearly that he is not a detective but 'a heart specialist'. Deception, accomplices and manipulation are all part of his method of operation and he works to cure unhappiness more frequently than to investigate crime.

These were very readable stories without being much more than that. The one I think I liked best was The Case of the Rich Woman, which was also the most improbable.

Kerrie - Thanks for this review. I admit, I haven't read the Mr. Parker Pyne stories in a long time, so it was nice to be reminded of them : ). There are Christie works I like more than these, but as I've often said, in my opinion, Christie at her weakest is far better than many writers at their best.

I agree with you, Kerrie, and Margot. Entertaining, but quite a long way short of Christie's best.