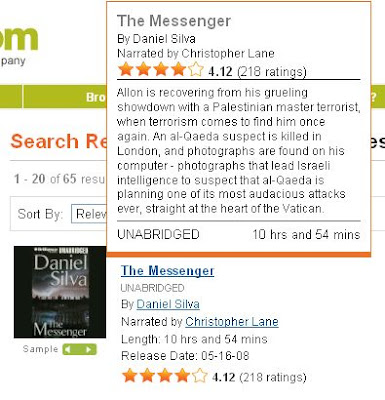 First published 2006
I read this as an audio book

A daring attack on the Pope and the semi-destruction of St. Peter's Basilica leads to an alliance, even if it has to be a secret one, between Israeli and American anti-terrorist squads with the aim of ridding the world of two of its most powerful and evil men.

For Sarah Bancroft, once rejected by the CIA as an agent after 9/11, there is no hesitation when she is invited to be part of the team that brings Ahmed Bin Shafiq down by infiltrating the household of a Saudi billionaire and art collector named Abdul Aziz al-Bakari.

THE MESSENGER is #6 in Daniel Silva's Gabriel Allon series. Although I was aware that I had begun mid-series, I felt that THE MESSENGER stood well on its own. The author leaks just enough background information into the main story so that the reader/listener is not left feeling out in the cold, as it were.

THE MESSENGER is a thriller, rather than crime fiction. There's quite a bit of violence, because Gabriel Allon is pretty ruthless. But there are some very highly charged scenarios, and at least one time that Gabriel appears to be done for, although you suspect he'll survive, just, because, after all, this is only book 6 in a 10 book series isn't it?

Daniel Silva's website (read a description and chapter one there)
There are two other things to look at: the dossier on Gabrial Allon,  and Behind the series, in which the author tells you how he created the series, and much more about Gabriel and the other characters in the books. That's when I discovered that not only have I begun the stories mid series, but that THE MESSENGER is the middle book of a trilogy.

Kerrie - Thanks for this review. Mr. Confessions of a Mystery Novelist is a Daniel Silva/Gabriel Allon fan, so I'll have to tell him what you thought of this. I'm so glad, by the way, that you make such a clear and important distinction between this sort of novel and crime fiction.