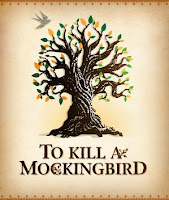 This week's Weekly Geeks task celebrates the 50th anniversary of the publication of  TO KILL A MOCKINGBIRD by Harper Lee. (published in the US July 11, 2010)

It wasn't a book that I read while I was at school, but by the time I became an English teacher in 1968, it was on the syllabus for 15 year old Australian students.


Thinking retrospectively, it probably marked the departure of Australian syllabi for students away from traditional classic texts like Charles Dickens and other British writers to admitting that there were other writers we should be introducing readers to.

Weekly Geeks asks to consider Did it affect the way you think about race and class in the U.S.? and I have to confess that it didn't. I don't remember focussing on attitudes to race, but mainly on the need for people like the childlike Boo Radley to be defended and protected by others. And in those days I wasn't much concerned with life in the US.

By the time I was reading the book with my students TKAM had already won the Pulitzer prize -1961 (which is I suspect why someone had suggested it for the syllabus) and been made into a film - 1962. It gave students a rare opportunity to read a book and then see it interpreted as a film.

I was fascinated though to learn later that Harper Lee never wrote another book, and that she was such good friends with Truman Capote.
We do know that she was born and raised in Monroeville, Alabama, and that she lived next door to Truman Capote. They were childhood friends, and that friendship continued until his death in 1984. She traveled to Kansas with him to help him with his research when he was writing IN COLD BLOOD.

Here is another interesting story connected to that:
In his childhood Capote made friends with Harper Lee, who portrayed him as Dill in her world famous novel To Kill a Mockingbird. "Dill was a curiosity. He wore blue linen shorts that buttoned to his shirt, his hair was snow white and stuck to his head like duckfluff; he was a year my senior but I towered over him. As he told us the old tale his blue eyes would lighten and darken; his laugh was sudden and happy; he habitually pulled at a cowlick in the center of his forehead."

So what about you? Have you read TKAM (take the poll in the right hand margin)
Leave a comment about when you read it, and how you remember that.

As mine is a casteist country, it did make an impact on me.

When I was an adolescent in the American south of the 1970s, people would often assert, quite forcefully, that Truman Capote wrote TKAM and asked his good friend Harper Lee to publish it under her name. I think that urban myth (although, I suppose "rural myth" would be the appropriate terminology) has finally been put to rest--although no one has ever disputed that Dill is a thinly-fictionalized version of Capote as a child.

BTW, Harper Lee is still alive and still, essentially, a recluse. I wonder if she ever thought about writing another novel.